The Tomkins Times was fortunate to receive another invite to a Liverpool fansite & bloggers meeting, this time at the Academy in Kirkby. Along with other notable sites, were able to spend a fascinating hour talking to Academy director Frank McParland, Academy technical director/ Head of coaching Rodolfo Borrell and U21s manager Alex Inglethorpe

Full audio is available via The Anfield Wrap http://www.theanfieldwrap.com/2013/03/audio-borrell-mcparland-and-inglethorpe/

Full video is available via The Redmen TV http://www.youtube.com/playlist?list=PLJRb6yxlBkhPqLGNyDoXgLTdwZYaSeqvz

The Academy management on … the purpose of the Academy

FM: Everything we do is to support the manager of the first team, making sure there are players there for him.  The three of us meet with Brendan very regularly.

FM: There is plan for each individual to get to the next level … the three of us do gradings:

FM: We are very happy with the current staff and coaches at the Academy…we’re really pleased with the coaching programme we have.  Pep [Segura] put a tremendous amount of good work into the coaches. Three years ago we only had one Sports Scientist, now we have a whole team of them plus GPS, heart monitors…it’s a very technological game now.

The Academy management on … local versus foreign

FM: Scouting is the key.  We’d love to have 100% scouse kids if possible.  Overall, we probably have about 75% local kids at the Academy because we start at age nine.  When we first started, virtually every player we brought in to look at we wanted to sign, now the level of quality has increased across the Academy and only tinkering is required.  Now we’re only looking to recruit top players.

RB: The order is local, British, foreign.  Anyone coming in from abroad should be clearly better than anyone local.  You cannot change the culture and traditions of the country, foreign players have to adapt to the local society.

FM: We always thought Raheem [Sterling] would develop into a top player…the three of us think that there are two or three in the current 16s who have a real chance of making it.

RB: The key is maturity, not age.

The Academy management on … the transition to Melwood

AI: The 18-21 age bracket is the hardest to get through…it’s a “black hole” for a lot of young talent in England and there are a few common factors:

The Academy management on … Burnout

AI: There are different types and it depends on the age.  With a young player going to the first team squad it’s as much mental burnout as anything else.  The key is what the player will be like at age 22.  For age group football, there’s more physical aspects as it can be very challenging for slighter players.  The ones who are physically dominating their age group need to be pushed themselves…from being a “gold medallist” in one group they need to become a “silver medallist” somewhere else.

RB: I call it the “honeymoon period”.  When a player goes from the U21s to the first team squad, everything is brilliant, even if the player isn’t playing any minutes.  The challenge for the young player is what happens the honeymoon is over and everything becomes “normal”, Steven Gerrard becomes normal.  The mental effort for a young player is very difficult, they think “I have to fight for my place” or “I’m not happy not playing any minutes”.  We always evaluate after the honeymoon period

The Academy management on … important characteristics for young players

AI: Integrity and the ability to self-analyse.  Can they correct their own weaknesses and not revert to type under adversity or pressure.  I’ve got a thing for the “silver medallist”, the player who learns to overcome his problems.  Carra is a very good example of this…Jamie might have even been a “bronze medallist at one point”! There is a real resilience in the local academy boys, it’s a general characteristic for most of the locals, a real toughness and inner steel.

FM: I always look for a big heart because being a “born winner” is difficult to instil.

The Academy management on … Joao Teixiera

AI: He’s a talent, very eye-catching and a very interesting character…Sporting Lisbon are a real template to follow.  The manager [BR] likes him but there’s a lot to refine in his game.  Suarez isn’t a big man but his “body-work” is key, it’s a very Latin quality, a “street” quality.  Joao has the same.  We’ve also got very high hopes for Brad Smith and Marc Pelosi.

The Academy management on … Brendan Rodgers

AI: we’re fortunate at the Academy that we have a manager who has a real belief and understanding in youth players.  The reserves feel there is real opportunity under him [BR]…if they’re doing genuinely well in the reserves then there is a real chance of the next step being the first team…look at Jordan Ibe in the last month.  I’ve absolutely no doubt that if the game [at Southampton] had been better then Jordan would’ve been given his chance.  At the minute, we have a manager who will come to the Academy and know all the players and their progress and ask questions…it’s a unique opportunity for the young players.

FM: Everyone wants it to happen, we want it, the manager wants it, the owners want it … it’s just not going to happen tomorrow. 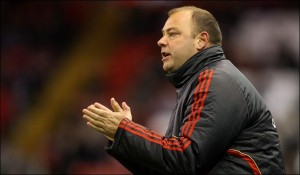