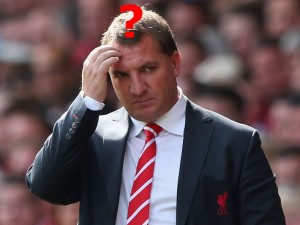 The Southampton game, like the Anfield defeat to Villa, halted any burgeoning optimism.  In the midst of defeat, some TTTers have referred to the fact that more people contribute to the ‘Comments’ section than when we have won.  As puzzling as this seems, I thought I would attempt to place this in context.

The doomsayers are often portrayed as negative dissenters; some optimists see them as traitorous and disloyal.  All hell breaks loose.  Yet, is the polarised battle necessary?  Even the optimists may be misguided.  There may be a third alternative to how we support our football team.

Throughout many of my own comments on TTT, I often refer to my approach of ’embracing uncertainty’ in relation to Brendan Rodgers.  I thought I would like to expand on what I mean by this.

This approach is based on three crucial issues: firstly, we cannot predict the future; secondly, the information we receive, even hard statistics, can be misinterpreted by fallible human minds as a pointer to a brighter future; thirdly, we receive our knowledge base from others; we absorb it and yet accepted facts can be unproven as time amasses new  evidence.  Is it wise to become inextricably attached to one viewpoint before the future unravels?

The Psychology of Winning & Losing:

“I hate losing more than I love winning”.

When footballers say this they reveal as much about all of us as they do about themselves.  Indeed it is a psychological truism for all human kind.  The despair of losing far exceeds the elation of a winning outcome. This should not be surprising; the impact of loss, in all its guises, pummels our emotions, defeats our morale and clouds us in abject misery. Loss is, in fact, a shape shifter with a pernicious omnipresence in all our lives, and with varying degrees of potency: bereavement, a relationship break up, redundancy, losing a football match, or indeed, losing money.

The latter scenario typically applies to Traders who pit their wits against the stock market; and any good trader must understand the Psychology of trading as much as the markets themselves. Failure to grasp this could lead to an emotional ambush.  The field of neuroscience flashes a warning:

“…the brilliant psychologists Daniel Kahneman and Amos Twersky have shown that the pain of a financial loss is more than twice as intense as the pleasure of an equivalent gain.” (The Intelligent Investor).

In other words, lose £1000 and the emotional pain will be more than double the joy if you had won the same amount.  Or, to apply a football analogy; imagine your mood when your team loses 3 nil, as opposed to winning 3 nil.  Remember West Brom on the first day of the season? Now recall your mood when we beat Wigan, Sunderland and QPR by the same score line; the contrast reveals your capacity to experience both ends of the emotional spectrum.

The problem is we often express a view when our emotions are clouded by the impact of those extremities; we are not in control and may err greatly in what we say.  The sense of loss, being greater in impact, will motivate us much more in terms of extricating that mood. If you have TTT accessible at your fingertips then what better convenience of an outlet – to express your chagrin – could you have?  Since this is inevitable it may be an idea to have a separate ‘Rant’ thread specifically for this purpose; a cathartic vehicle for those that need it.  What this would do is prevent the match threads becoming overloaded with unwanted invective and grief, and preserve the prominence of more constructive comments and criticism.  In actual fact, the ‘Rant’ thread may provide a few entertaining laughs, and in hindsight enable people to revisit their irrational state at a given moment in time.  Those who do not wish to rant, or read such Posts, would have no need to visit it.

This said, being flushed with optimism can pose its own dangers, though not equal to being crushed by pessimism, our over-confidence can still render us irrational in mind, thought and emotion.

As Bono sang: “We’re one; but we’re not the same”. There are two protagonists who, for convenience, I have chosen to epitomise the extreme polar opposites within this fragmented and diverse fan base.  I shall not name them but, ironically – despite their opposite views – both have crossed swords with the TTT community; many of you will, no doubt, know who I mean.

One vehemently rails against Rodgers with rapier sarcasm, scorn and bile. Straight from the outset, propelled by undying allegiance to a deposed King, he has not given Rodgers even a modicum of support.  Rodgers will turn us into a ‘mid table’ damp squib.  The other, by contrast, had decided that Rodgers was the rightful heir apparent and, without question, will eventually become a great Manager. He counters with equal umbrage should anyone have the temerity to question Rodgers’ acumen in any shape or form; nor is this necessarily a defence of Rodgers – but himself rather; and his own opinion.

I had watched the two of them espouse their opinions for some time whilst jealously guarding their positions; they are immoveable.  Such inflexibility is ridiculous since it assumes a greater wisdom.  Football clubs have allocated inexhaustible resources, time, money and analysis into creating successful blueprints; almost all of them have failed if you look at the share of domestic trophies in the last decade.  What makes opinionated individuals – mostly outside the game looking in – believe that they are a higher sage?

Eventually, I knew, one of our protagonists will claim victory; but still, both of them would be wrong.  Their strategy is the mere backing of a horse, where just two winners exist, meaning one will definitely win the race. In the meantime, they are basically playing a game of stick the pin on the donkey’s arse; because, truthfully, their respective stances are corroborated by little substance.  It is hard to trust either. Even experts with copious knowledge bases – which neither is – can get it wrong.

Many years ago, as a young man, I read a quote attributed to JFK following the Bay of Pigs fracas:

I did not really get it.  Experts, in my mind’s fledgling maturity, had superior knowledge in their recognised fields.  It is they who we must look up to; and should their advice be received with mistrust then who the hell can you trust?  The quote rescinded to the back of my cerebral attic – until quite recently.

Memory smote; reading ‘Thinking Fast and Slow’, whereby Daniel Kaheman had evoked Tetlock’s citation of when so called experts – no less susceptible to human fallibility than the rest of us – make erroneous applications to a viewpoint:

“Experts are led astray not by what they believe, but by how they think, says Tetlock.”

“How they think?” that nailed it.  Many people, including experts, become dogmatically fixated on one theory – their theory and the only one they wish to hear. Their refusal to debate is a dislike to be disagreed with; they hate to be wrong. Theirs is a stoic desire to win the argument rather than arrive at the truth; the essence of debate is lost. Personality wise, they are bombastically opinionated, imbued with superiority complexes that say their predictions are right.