I’m very interested in the sporting psychology around “mentality”, “baggage” and “scarring”.

I believe that most sportsmen become scarred by repeated losses and defeat.

I then wanted to look at the “senior players” who’ve been with the club throughout that period.  I collected detailed data for Johnson, Skrtel, Agger, Gerrard and Lucas (starts only).

(Note: it doesn’t take into account the quality of the opposition.)

Looking at the headline numbers, it’s remarkable to think that a talented footballer like Glen Johnson has lost 34 of the 102 league games he’s played for Liverpool.  It’s a staggering number of defeats.

Martin Skrtel has only won one more league game than he’s lost in four years (41 to 40). Again that’s simply astonishing.

Four of the five players are close to the average loss rate of 33.33%. The relative performance of Lucas and Agger is not significant. Skrtel stands out as his personal loss rate is over 3% worse then the overall figure.

In terms of wins, Johnson, Lucas and Agger are all aboot 3% above the club win rate. Skrtel again is the big exception being 5% below.

Next I looked at results depending on how many of them start:

When all five start the team win% is up to 58% but loss rate also 42%. Interestingly, eight of the 12 occurrences have been this season under Rodgers and the record is W4 (Southampton H, West Ham A, Fulham H, Sunderland H) L4 (WBA A, Villa H, Stoke A, Man Utd A)

When only one of them starts there’s a 100% loss rate. A total of 107 of the matches feature either three or four of them starting but the results show better win% with three than four, so I moved onto “without you” analysis.

Last table is where one of the five does not play but three or four of the others do play. The results here are extremely interesting

Here we see Skrtel doesn’t start and the team win% goes up to a very good 58% while the four-year loss% is almost halved to 17%. Points per game is a Champions-League-like 2.00.

The absence of Agger looks key as the team only has a 31% win rate without him and the loss% rockets to 41%. PPG plummets to a Hogdson-esque 1.22

Lucas is a curious one, perhaps counter-intuitive.  The numbers suggest that the team doesn’t lose that many when he’s absent but don’t win many either.

The numbers without Gerrard are very close to the overall team performance in the four years (win 42%, lose 33%)

Johnson is the other interesting one along with Agger. When’s he absent the team lose more and find it much harder to win.  The first part of this again seems somewhat counter-intuitive as the narrative is that Johnson can’t defend and he contributes to defeats.

Trying to sum up, there does seem to be the makings of a case to say that the most important factor in Liverpool getting better results is if the talented but nervy Martin Skrtel is not in the team. His absence looks to be more significant than any other combination of players.  A classic case of addition by subtraction? 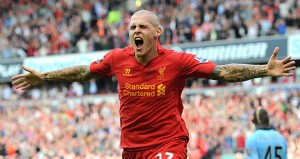