Liverpool’s trip to the DW Stadium to face Roberto Martinez’s Wigan Athletic on Saturday – 5.30pm kick off UK time – will be our 800th fixture in the Premier League, a milestone only six other clubs can reach this weekend. 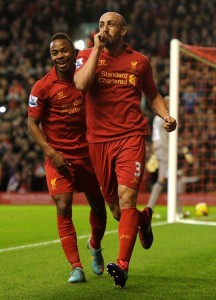 The Reds secured a comfortable 3-0 win in the reverse fixture at Anfield earlier in the season thanks to a brace from Luis Suarez and Jose Enrique’s first goal for the club. The corresponding fixture between the two teams last season ended in a 0-0 draw, meaning the Reds are without a win at Wigan since a 1-0 victory in 2007 – a winless sequence of four matches.

Wigan currently sit just outside the relegation zone courtesy of a superior goal difference over Aston Villa who occupy 18th, while Liverpool are in 8th, ten points behind 4th placed Chelsea.

Premier League record since the two clubs met back in November: