I might be mistaken, but do people honestly think there’s one professional footballer alive who hasn’t deliberately or instinctively (as a reaction rather than a premeditated act) handled the ball in their career? It happens. And how many admit it at the time?

Maybe once in a blue moon someone holds their hands up, but a team will get so many of these decisions both for and against them it seems almost perverse to draw the officials’ attention to it. And what about all those handballs that are given when it wasn’t even handball? And why is deliberate handball (and I’m not saying this was) only seen as the act of the devil when it’s certain players in certain parts of the pitch?

To call Luis Suarez a cheat for what he did at Mansfield is ludicrous. Over a decade ago, before I became a professional writer, I had a letter published in a major football magazine, questioning why divers are labelled cheats but defenders who pull shirts and shorts, and who make off the ball challenges, are not. What about every time a player knows the ball bounced last off them but claim the contrary? It’s all a kind of cheating, but none of it is cheating with a capital C. It’s rule-bending at worst. Every player in every match tries to hoodwink the officials. It’s part of the game.

It’s the job of the officials – and hopefully, in future, technology – to spot it. If the game had indeed been played in a Corinthian sprit these past 100 years on these shores, as some moralisers seem to suggest, all decisions would have been left to the players; with it left to their own honesty to decide whether the ball crossed the line or if it should be a penalty, as we all had to do in the school playground. (I’m still smarting over a disallowed goal in 1979 that I know was in. “Over”, the keeper said. Bah. But there was no crossbar, just two jumpers for goalposts.)

Cheating is match-fixing, taking bribes, throwing games. That doesn’t mean we don’t feel cheated when our team is the victim of an outrageous dive or a handled goal, but equally, no fans moans to the FA or the media when their team is the beneficiary. So we either accept it or become hypocrites. (Some go one stage further and become moralising hypocrites.) Decisions are said to even themselves out, but of course they never can, because no ref is going to give you the three penalties you are overdue, simply because you are due them; and if he did, to even up the three you failed to get at the start of the season, it would be grossly unfair on your opposition.

However, over a long period of time you will get calls that go your way and calls that don’t; not in equal measure, but Mansfield will surely get some fortunate decisions this season; maybe they even got some on the way to the 3rd round. A neutral refereeing assessment site has Liverpool as the most harshly-punished team this season in the Premier League, in terms of bad calls costing points. It sucks, but all we can do as fans is hope that it swings back in our favour.

It’s fair to say that Suarez has done one or two things in his career that he won’t be proud of, but most of the stuff for which he is vilified is ludicrous. The outcry that surrounded his handball in the World Cup was unbelievable. Suarez was rightly sent off and banned for the semi-final. But he only did what we’d all happily see someone on our team do if it was a defining moment in the game. You’d rather not have to win that way, but if you do you take it.

Three years earlier, in a feisty Merseyside derby, a young Brazilian on his debut in a foreign land (and replacing Steven Gerrard to boot), struck a last-minute shot into the top corner to win the game for Liverpool. But no! Phil Neville saved the shot with his hands. Neville was sent off, Liverpool scored the penalty, and that was it. End of story. Neville wasn’t a cheat, just a footballer.

The way Suarez was treated over denying Ghana a place in the semi-finals in 2010 was appalling. The fact that Ghana were part of the host Continent is neither here nor there. Suarez was punished and Ghana failed to score the penalty. Suarez wasn’t cheating – he probably didn’t even decide to handle it until that split second before he realised he couldn’t head it. These cases are often not premeditated, as there’s not enough time. But even if they are, the rules are there to deal with them. And if the punishment isn’t severe enough then that’s the fault of the lawmaker’s. (I like the idea that if a player is sent off for handball on the line he shouldn’t leave the field immediately, but instead stand in for his goalkeeper for the penalty; if he wants to be a goalkeeper, let him! This then makes it more likely that the penalty will be scored, and if the striker can’t put it past an outfield player wearing gloves then he gets what he deserves. The problem would be what happens if the penalty is saved, as play will continue. In my world, I’d treat that penalty like one from a shootout, and if saved the ball goes dead. Restart from a goal kick.)

Come forward to 2012 and Luis Suarez, and “divers” like him, were said to be a cancer on the game, according to Fifa vice-president Jim Boyce. Within hours of those prophetic words, not Suarez but Phillip Neville was throwing himself to the ground in anticipation of a tackle that never came, with one of the season’s most blatant dives. Being as he’s British, the incident was laughed off by the majority of the mass media; just as in 2007 he hadn’t been vilified for handling on the line in a meaningful derby. Spot the difference with the two Suarez incidents?

I empathised with Irish fans over Thierry Henry’s handball to deny them a place at that same World Cup, as it’s galling to lose a game that way. But Henry did nothing that constitutes cheating. Henry had been unfortunate a decade earlier when Liverpool’s Stephane Henchoz handled a shot in the area, which helped the Reds lift the FA Cup and deny the Arsenal man another medal. Should he have admitted the handball in 2009 but also forced the FA to change the result a decade earlier?

I appreciate that in bigger games, with more at stake, it feels worse when your team is on the receiving end of a bad call, but it’s up to the authorities to employ the best officials and to develop technological aids, given the money they make from the sport. Other sports – almost all of which don’t have football’s wealth – have invested in it, for the better.

Suarez has probably had more calls go against him that for him; just look at the four or five penalties he should have had, including one karate chop to his neck. But it goes further: how many times has he been wrongly called offside this season because the opposition centre-backs put their hands up without even knowing if he was offside? How many potential goals has that denied Suarez and Liverpool? How many of those defenders went to the officials to say “actually, having seen my full-back was out of position, he wasn’t offside after all?”

How many admissions have defenders made to late tackles, sly trips, sneaky shirt pulls?

So either we stop vilifying only certain players for these actions or we have hysterical commentators shouting “Cheat! Cheat!” fifteen times a minute, at every infringement where some level of deception is involved. 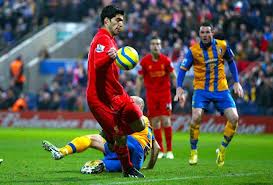