For Liverpool there was only one change, with the injured Enrique replaced by Wisdom, so Johnson went to left back. This prompted Downing and Sterling to swap flanks in order to provide balance within the 4-2-3-1 formation.

For Sunderland, O’Neill largely kept the side that faced Tottenham, also making just one change. Rose replaced the injured O’Shea, with Kilgallon moving central to partner Cuellar. Everyone else was in their usual positions within the team’s  4-4-1-1 shape. 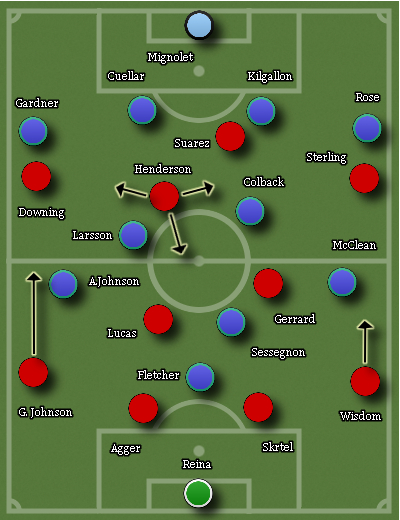 Sunderland, like QPR in the previous match, were very poor throughout. Liverpool combined the tactical failings from the match at Loftus Road with some tactical and technical brilliance. In short, it was a “rich” game for both the occasional fan and the more obsessive tactical nerds. A good start to the 2013!