Harry Redknapp continued with the 4-4-1-1 formation, but made three changes. Because of Green’s own goal in the previous match, Julio Cesar was re-established between the sticks. At right back Onuoha replaced Fabio, while in midfield Diakite came in to partner Mbia (in the place of Faurlin).

For Liverpool there were also few changes. Allen replaced Lucas – to partner Gerrard in the double pivot – while Henderson replaced Shelvey at the tip of the midfield triangle. On the flanks, Sterling was selected instead of Suso to occupy the left flank. Rodgers continued with the 4-2-3-1 shape used in the previous two matches. 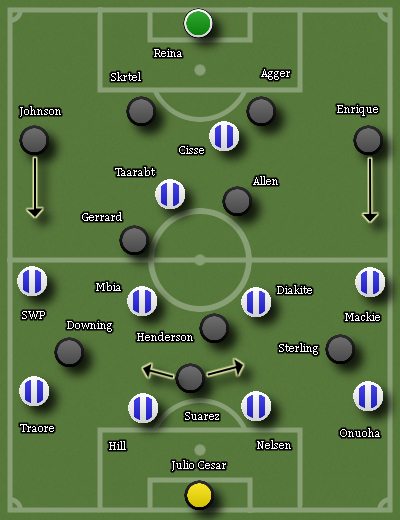 The match was officially over by the half hour mark after Liverpool stormed into a three goal lead. However, there were some tactical changes during the next hour, that were interesting and intriguing, even if the result was beyond doubt.