The Reds begin 2013 with the visit of Martin O’Neill’s Sunderland to Anfield on Wednesday evening, 7.45pm kick off UK time. The 3-0 victory over Queens Park Rangers on Sunday meant we ended 2012 on a positive note, despite the outbreak of a virus that resulted in Brendan Rodgers being forced to return home on Sunday morning in an attempt to limit the outbreak amongst the playing staff.

That win saw us end the year in 9th place – eight points adrift of 4th – while Sunderland’s 1-2 home defeat to Tottenham leaves them in 13th place, five points behind the Reds and five points above the relegation zone.

The Black Cats have lost four, drawn four and won twice on the road this season – 3-1 against Fulham and 1-0 against Southampton – while we’ve won four, drawn three and lost three in the league at Anfield prior to Sunderland’s visit. 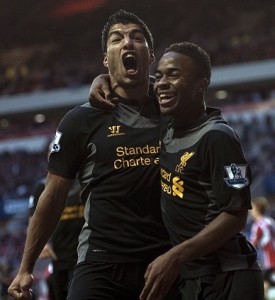 The two sides drew 1-1 at the Stadium of Light back in September with Luis Suarez cancelling out Darren Fletcher’s strike. The corresponding fixture last season also finished 1-1, with Suarez giving the Reds a 12th minute lead after missing an earlier penalty before a spectacular goal from Sebastian Larsson on 57 minutes earned the Black Cats a share of the spoils.

We are yet to suffer defeat at the feet of Sunderland at Anfield in the Premier League (11 games; five wins, six draws. This extends to 13 games including pre-Premier League games) and you have to go back to October 1983 to find the last occasion the Black Cats took all three points at L4: a 0-1 defeat courtesy of a Gary Rowell strike.

Phil Dowd has refereed two of our fixtures this season and both have been defeats away from Anfield:  0-3 at W.B.A. and 1-2 at Tottenham.