Pulis named largely the same team that earned him a draw away at Tottenham, except for Cameron and Wilkinson swapping places (in the previous match they were left and right back, respectively), with Kightly replacing Shotton on the right flank. The formation stayed 4-4-2.

For Liverpool, Rodgers continued with the same XI within the same 4-2-3-1 formation. 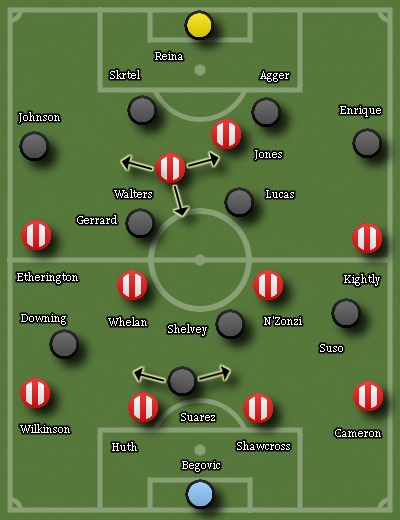 This match followed a simple pattern. When Stoke pressed, Liverpool struggled – and in this period not only did Stoke win the tactical battle but also went ahead in the game after going behind in the first minute. Then with Stoke dropping-off, Liverpool started to come to life only for the game to be truly over as soon as the second half opened and Stoke renewed their more aggressive approach. With this in mind it’s only natural to put most attention on  how exactly Stoke managed to win the tactical battle and eventually the game too.