After a disappointing defeat to Stoke City on Boxing Day, the Reds travel to Loftus Road to take on bottom placed Queens Park Rangers on Sunday (4pm kick off UK time) in what is our final game of 2012.

Our 1-3 defeat to Stoke was the tenth occasion we’ve conceded two or more goals in 19 league games this season and our points tally of 25 from 19 games is our joint lowest – on par with Roy Hodgson’s record in 2010/11 – at this stage of a campaign since the Premier League’s formation.

Some solace may be taken from how poor Q.P.R.’s season has been to date with just one league win – 2-1 against Fulham at Loftus Road – picked up so far this campaign. They’ve drawn four and lost four of their nine home games this season and have kept just two clean sheets in their 19 league games (against Chelsea at home and Sunderland away).

Unfortunately for us, Harry Redknapp now manages them. I say unfortunately because of the 19 times we’ve faced a team – West Ham, Portsmouth, Southampton and Tottenham – managed by Redknapp away from home, we’ve won just three times, drawn three and lost the other 13. 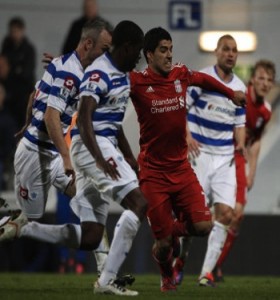 The Reds squandered a two goal lead in the corresponding fixture last season, losing 2-3. Second half goals from Coates and Kuyt had put Liverpool 2-0 up with just 18 minutes to go but strikes from Derry, Cisse and Mackie secured all three points for the Hoops.

That victory sparked a run of five consecutive home victories for Q.P.R. and in the process secured their Premier League survival by a single point, while Liverpool picked up ten points from the remaining nine league games, ending the campaign in 8th place.

Martin Kelly (knee) and Fabio Borini (foot) are both ruled out for Liverpool while Oussama Assaidi (knee) is a doubt.