Liverpool claimed back to back league victories for the first time this season with the 3-2 victory over West Ham on Sunday and the Reds will be hoping to make it three in a row when we host Aston Villa on Saturday afternoon, 3pm kick off UK time. That win over the Hammers moved Liverpool up to 10th, while Aston Villa sit in 17th. 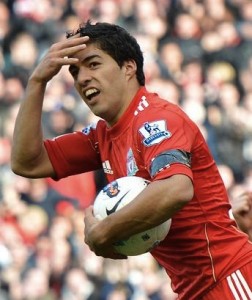 The Villains have scored the fewest goals in the league this season with 12 in 16 games and four of those goals have came on their travels. Villa’s 0-0 stalemate with Stoke last Saturday was the sixth occasion they had failed to score this campaign, the joint highest in the league alongside Stoke and Wigan. Despite their poor form in the league, Paul Lambert’s side have progressed to the Capital One Cup semi-final after defeating Norwich City 4-1 on Tuesday evening, although the victory may have came at a cost with Darren Bent picking up a hamstring injury in the first half.

The officials for this match are:

Fabio Borini (foot) and Martin Kelly (knee) are still ruled out for Liverpool and Jose Enrique (hamstring) is a doubt.