Both managers made one change from their previous league fixtures. For Liverpool, Enrique was injured and replaced by Suarez, which prompted changes in two positions: Shelvey went to the left wing, Downing to left back. Lambert replaced Agbonlahor with Weimann.

With this in mind it was rather logical to see both teams continuing with their recent formations – Liverpool in their 4-1-2-3, Aston Villa with the 3-5-1-1. 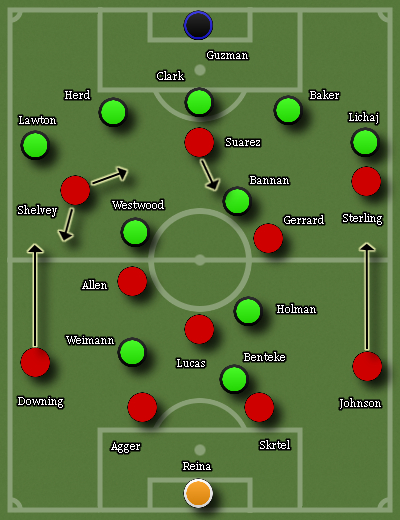 However, with Liverpool expected to line up with this XI and in this framework, the major tactical interest before the match was how Lambert’s formation would set up. Because his decision turned out to be the crucial tactical factor of the match, it’s only fair to start with Villa’s display.

What Is Brendan Rodgers?