Liverpool follow up the gruelling Europa League trip to Russia in mid-week with a trip to London to face Chelsea at Stamford Bridge on Sunday (4pm kick off UK time), though most of the side expected to be picked for Sunday will not have made that arduous trek. Chelsea in comparison had a home tie against Shakhtar Donetsk in the Champions League on Wednesday evening and should be the fresher side with an extra day’s rest, no travelling and a larger more expensively assembled squad at their disposal. 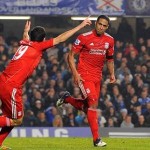 The Reds have a poor record at Stamford Bridge with just 18 wins in the 69 previous visits to the Bridge, while we’ve won just four of the previous 20 meetings in the Premier League at Chelsea. However, three of those four away victories  have came in the last four trips to Stamford Bridge, and Liverpool also won there in last season’s Carling Cup tie, the game in which Lucas sustained his season-ending injury.

The corresponding fixture last season saw the Reds secure a 2-1 victory courtesy of goals from Maxi and Glen Johnson, and with Brendan Rodgers’ side having only picked up two wins from the previous ten Premier League games this season (11 points from ten games, seven fewer than the same stage last season under Dalglish and one point fewer at the same stage under Hodgson in 2010/11), a positive result would bring a big boost to a relatively young side.

Fabio Borini (foot), Martin Kelly (knee) and Lucas (thigh) are all ruled out while Pepe Reina (hamstring) and and Glen Johnson (muscle spasm) are still rated as doubtful.