Hiddink selected a familiar and largely predictable side – Zhirkov continued on the flank with Tagirbekov as a fullback behind him on the left; Jucilei and Ahmedov anchored the midfield, so Boussoufa played on the right. Up front Eto’o and Traore started together.

For Liverpool, the rumours were correct, Rodgers started with a back three, wing-backs and – surprisingly or not – Cole just off the lone striker Morgan. In the midfield, Coady was tasked to offer additional defensive stability and recycling capabilities on his first team debut.

Although it was as expected, Hiddink opted for his default attacking shape – 4-4-2, which then to morphs into 4-2-3-1 when they reach the last third – it was a slight surprise to see the team actually lining in what was closer to 4-4-1-1, that again then morphed into 4-2-3-1 in attack. The difference came from the fact that Eto’o was more of a third midfielder, starting deeper and trying to act as a pure number 10, rather as a false 9 (ie: a forward who would start higher up the pitch but then drops deep to offer diversity and link-up play.).

Rodgers for a second time this season opted to choose a sort of 3-5-1-1 shape for its purely defensive capabilities – as was the case in the second half against Everton at Goodison. What was interesting to see was when defending, the team was instructed to just stand-off and form what looked like a 5-1-4 shape with the wing-backs alongside the back three, Cole and Morgan levelling with the midfielders (more on this later) to make a bank of four and Coady staying between the two straight lines to protect the space there. 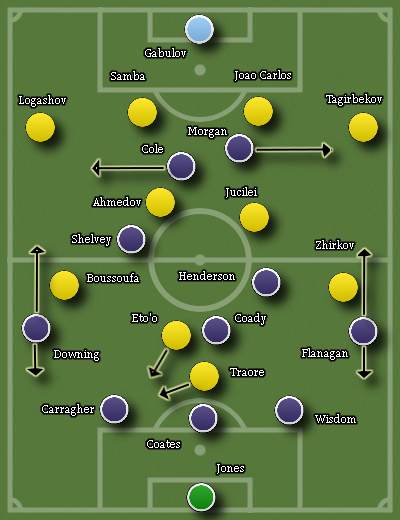