By Anonymous. (The author wishes to conceal his identity, presumably because some people will take this too seriously. It is a look at historical precedents, not an actual claim on the honours in question.)

Who won the FA Cup in 1988? Given that Liverpool were involved in that final, losing to a goal scored by Laurie Sanchez, this would seem to be a straightforward question. However the subsequent events surrounding Wimbledon FC are worth investigating further, as this may open up some interesting questions on the claim to honours for other clubs.

In September 2003, after a period of discussions amongst various factions including the FA, supporters groups and the club, Wimbledon FC finally left London, having played at Selhurst Park, Crystal Palace’s home since the start of the 1991-92 season. With a relatively low support base, the club had found it impossible to invest in their traditional Plough Lane home and had been seeking a new and permanent home during the intervening period.

For a period of one season therefore, a club named Wimbledon FC played at the National Hockey Stadium in Milton Keynes, much to the distaste of not only the Wimbledon fans who had not been in favour of the relocation, but also of the fans of many other clubs, who called for a boycott of the phoenix club.

In August 2004 a new club was founded on the remains of the former Wimbledon FC, bearing the name of the new location – Milton Keynes Dons, usually  shortened to MK Dons. It would seem that this is the end of the story. However, given the sense of ill-feeling between the MK Dons and the new London-based AFC Wimbledon, together with the Borough of Merton where the original Wimbledon FC had been based, a long and at times acrimonious legal wrangle developed as to who were the true successors of the 1988 FA Cup winners.

This dispute rumbled on for three years, until finally in August 2007, the matter was settled. The achievements of the new club, MK Dons, would only be considered from the date of its formal renaming in 2004. All previous achievements were re-assigned to the original Wimbledon FC which was no longer deemed to exist. Although AFC Wimbledon did therefore not have the trophies awarded to them retrospectively since they did not legally exist at the time they were won, the replica FA Cup was returned to the Borough for the people of Merton for safekeeping.

In short, the club that left its original home was considered to have forfeited its right to claim the original FA Cup victory, since it too had not existed at the time. MK Dons was therefore effectively determined to be a franchise rather than the direct descendent of the original Wimbledon FC.

It is a well established fact that Liverpool FC was formed in 1892 when Everton FC left Anfield to play at their new home, Goodison Park, after a dispute over the levels of rent being demanded by the landlord John Houlding. However, research has shown that there are many facts which, although in the public domain, have only recently been pulled together[1].

There is a detailed narrative of the events that led up to the split of the clubs (covered in detail in Chris Rowland’s article Then There Were Two), with the Everton Committee choosing to make a counter-offer to club president and landlord John Houlding of terms which were never likely to be acceptable, following his previous offer. It is however necessary to take a step back to understand the series of events which led to this split.

Everton, formed in 1878 following an amalgamation of a number of church teams, the most famous being St Domingo’s, had wandered through Liverpool looking for a home before settling at Anfield in 1884. By 1892 there were serious rifts amongst the committee, finances being generally attributed as the main reason but clearly there were political, social and commercial factors involved as well. By the start of the 1891-92 season it had become apparent that the breakdown was likely to be terminal.

Matters came to a head at the board meeting on 25 January 1892, when a proposal was minuted and passed that, should Houlding refuse to accept the terms soon to be proposed to him regarding the level of rent, a limited company would be formed to conduct the affairs of the club (presumably without the president’s future involvement) and at the same time the club would move to Goodison Park, a site that had obviously already been earmarked.

At the subsequent board meeting less than two months later, the split was confirmed, Houlding rejecting the offer, leaving the rump of the Everton committee to remove him and his supporters from the board and therefore free to move to their new ground, which would be completed during the summer months in time for the start of the 1892-93 season. Houlding was therefore left with a stadium but no team, as the players had moved almost to a man with the committee, transferring their allegiances to the other side of Stanley Park. Or so the story goes…

However, the formation of the limited company as detailed at the January board meeting, was deferred until 14 June 1892, the middle of the close season as Everton were busily building their new home [2]. In contrast with this, the commercially savvy Houlding had registered a limited company unbeknown to the Everton committee on 26 January 1892, in the name of Everton FC. As president he was therefore in a position to take such action, and although he was subsequently forced to rename the club and limited company on instruction of the Football Association, there can be no dispute that his limited company came first. 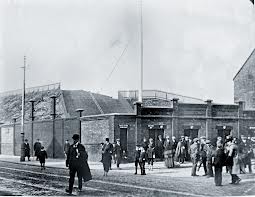 This therefore raises an interesting question due to the primacy of the subsequently named Liverpool Football Club and Athletic Grounds Ltd., a name which is still used by the trading entity of the football club today. If this was the first formed legal entity, is this in fact the direct successor? Is the current Everton club and legal entity an offshoot of the Liverpool club, since, as has more recently been the case with MK Dons, it was this club that formed the later of the two and had to seek a new venue? The transfer of players under contract would also suggest that Everton’s subsequent status was the same as MK Dons a whole century later.

This would of course change history irrevocably. The current Liverpool club would now be able to trace its lineage back to 1878, whereas the Everton club would be the new kid on the block, only coming into existence in June 1892.

During the period between its nominally accepted formation in 1878 and 1892, the Everton club had won a series of local Cups but only one national trophy, the Football League in 1891, this success in no small part giving rise to the question of rents between the other members of the committee and the landlord and club president John Houlding. There had been no success in the FA Cup, so this is effectively beyond consideration. However it would seem plausible that this 1891 League Championship success should be re-assigned to the direct descendent, Liverpool, rather than the Everton club, who had only been formed as a separate limited company five years after the trophy had been won.

If we are to follow the same logic as has been applied and now accepted by the football world with regards to the Wimbledon and MK Dons affair to the Everton/Liverpool split, then the Goodison Park club should be shown with eight titles to its name, whereas Liverpool would now have 19, level with Manchester United again at the summit of the English game.

A Tactical Glossary - Some Terms for the Modern Age