It was an unfortunate piece of coincidence that on the weekend in which Bill Shankly would have turned ninety nine, results on the pitch brought up one of the worst periods during his tenure as Liverpool manager.

By picking up just one point out of a possible nine the current Liverpool team matched the results of Shankly’s 1962-63 side that also achieved such a total (the coincidences do not end there: on both occasions the point was achieved through a 2-2 draw with Manchester City); a total that every Liverpool side had bettered since. 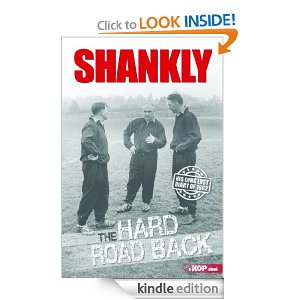 The similarities, however, end there.  When the league season kicked off in August of 1962, Liverpool were making a return to the top flight after an absence of eight seasons.  The man who had taken Liverpool up was, of course, Bill Shankly after he had built a side capable of dominating the Second Division.

During the weeks leading to that first season back, Shankly had embarked in what was (and probably still is) an unusual venture: for fourteen weeks he had written a column on the Liverpool Echo going into incredible detail about how that team had been built and promotion achieved.

These columns have now been reproduced in a unique book that offers an insight into Shankly’s early Anfield days and the mind of the man who built the modern Liverpool.

Unearthed by The Kop Magazine, ‘Shankly: The Hard Road Back’ tells the story of how the great Scot turned the Reds’ fortunes around in his own words.

Published over a 14-week period in the summer of ‘62, Shankly revealed his Anfield battle-plan in unprecedented detail in the Football ECHO – revealing everything from his tactical thinking and transfer discussions in the boardroom to how he trained his players and sought out opponent’s weaknesses.

Indeed, hindsight proves just what a great visionary Shankly was.  His belief in the importance of fitness extended beyond what was commonplace at the time.  Training was split up so that each coach handled different groups to take into consideration different work loads and individual requirements.  Similarly, every detail of the training routines was planned in advance to ensure that the players got the utmost benefit from the routine.

Shankly’s attention to detail – a trait of any successful manager – was such that before a game at Sunderland he tried to measure when the sun went down behind the goal to determine which was the best side of the ground to kick-off towards!

There are also glimpses of his legendary motivational abilities.  When talking about the young players at the club he states that “I brought to Anfield a number of boys who attracted my attention as youngsters out of the ordinary”.  You can imagine James McKenzie, Robert (Bobby) Graham, George Scott, Gordon Wallace, Philip Tinney and Tommy Smith reading those words and their self-belief going up by a couple of notches.

Of those players, two – Graham and Wallace – eventually enjoyed varying degrees of success in the first team whilst Smith went on to become a club legend.  The investment of time and effort Shankly had put into the identification of these players paid off.  Although he does not say so in the articles, a bit of subsequent research (such as this interview with George Scott) shows just what a personal interest he took in these players.

Yet these articles also hold evidence that even the great man sometimes got it wrong. One of the players he bought during the season was Jimmy Furnell.  The goalkeeper was described by Shankly as a “player in whom I had been interested in for longer than this particular season” and his faith in him was such that he was immediately given the number 1 shirt which he retained till the end of the season.

Furnell, however, failed to live up to the expectations that Shankly had for him and midway through the following season he would be replaced by Tommy Lawrence.

Shankly: The Hard Road Back is only available as an e-book.