Liverpool begin their defence of the League Cup title we won last season with a tie against Steve Clarke’s West Bromwich Albion at The Hawthorns on Wednesday evening (8pm kick off UK time). 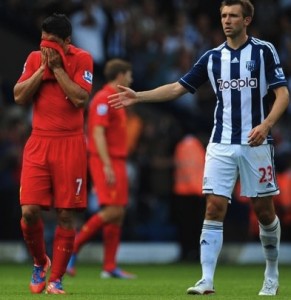 The Reds will be hoping to gain some manner of revenge for our opening day reverse against the Baggies, although progress to the 4th round stage won’t be adequate compensation for the points we failed to pick up in the league.

With this tie sandwiched in between league games against Manchester United and Norwich City, Brendan Rodgers is likely to adopt a similar approach in the Capital One Cup – as it is now known – as to what he has done in the Europa League group stages with a team made up of youngsters and fringe players, while the injuries that Agger and Borini picked up during the 1-2 defeat to Manchester Utd on Sunday has further weakened an already threadbare squad.