Liverpool have won all five previous home games against West Brom in the Premier League without conceding a single goal.

Overall, the Baggies have lost 10 of their 11 PL clashes with the Reds without troubling the scorers, winning the other 2-1 last season.

Roy Hodgson’s win percentage as manager of West Brom (37%) is now higher than it was during his spell with Liverpool (35%).

Liverpool have drawn a league-high nine home games this term.

Only seven teams have taken fewer points on their own patch than Liverpool have mustered this term (24).

West Brom have lost three of their last four away league games (1D) and have failed to keep a clean sheet in 15 games on the road.

Just 4% of the goals the Baggies have conceded this season have come from corners, a league-low proportion.

Anfield has seen fewer goals than any other Premier League ground this season (33).

Liverpool have hit the woodwork 28 times now, seven more than any other side.

Dalglish has flirted with 4-3-3 in his last five matches. Only against Everton (both in the league and in the cup) has he started with a 4-4-2. In this game, however, he chose to play with two forwards. Carragher made way for Enrique while Maxi and Kuyt played on the flanks instead of Downing and Henderson. Gerrard was rested as a precaution which allowed Henderson to start in the centre.

On the other side, Hodgson went with a surprisingly pro-active side, also playing with 4-4-2 as he had done against Queens Park Rangers in the previous game. This time Long partnered Odemwingie up front as Fortuné was recovering from a knock suffered last time out. The other change was that Olsson came back from suspension and replaced Dawson in the heart of defence. 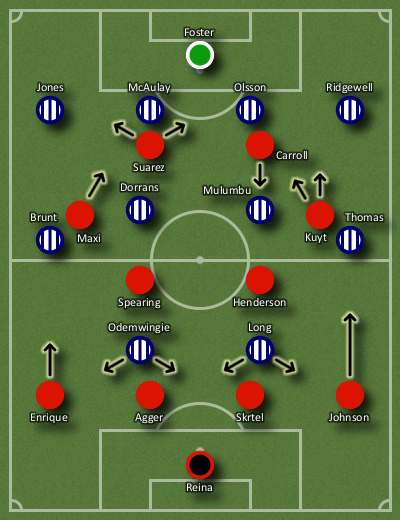 The match was unsurprisingly one sided, so the main focus of this report is on Liverpool. But before going into detail about their approach, I will start by sketching out how West Bromwich Albion tried to threaten Liverpool when they actually got the chance to attack.

Hodgson’s team defended as expected – two tight banks of four squeezing out the space between the lines and in the channels. The surprising element was that they had two attackers playing alongside each other rather than as split forwards (such as in a 4-4-1-1). It is safe to conclude that this was as attacking a team as Hodgson could put out.

What made them pro-active was the way that they behaved when they attacked. Hodgson’s teams are famed for focusing on long-ball transitions from defence to attack. This match was no different, but the long-balls were not negative, nor were they one-dimensional. They were actually quite fluid.

The  two players up front, Long and Odemwingie, constantly worked Liverpool’s channels, while on the wings the wide players were playing on their “wrong” side, naturally encouraging them to come inside. They attacked in two main patterns. The first saw them feed the forwards directly in the channels; the second was more sophisticated (considering the coach). It involved a sort of recycling process in deep areas which allowed the forwards chance to drag their markers out of position so that the in-cutting wingers could come into the channels and exploit the space. 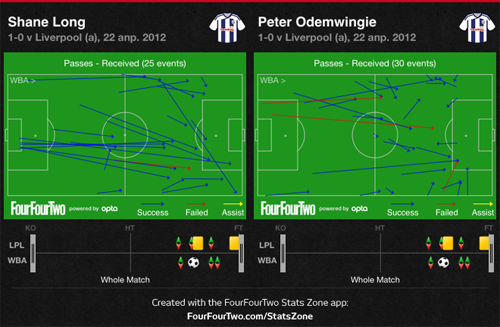 This strategy showed itself rarely due to Liverpool’s dominance – but each time they pulled it off they caused real danger. As a result, Albion had a couple of very good chances to score in each half. Ironically though, their goal didn’t come from one of these well-crafted moves but as a result of a mistake from a Liverpool player.