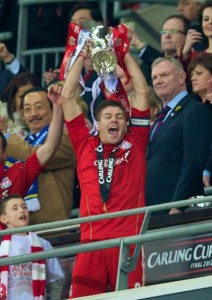 Liverpool’s league commitments have taken a back seat to the cup heroics over the past three weeks. With one trophy already in the bag following our Carling Cup triumph over Cardiff City – and with it Europa League qualification for next season – it’s time to re-focus our efforts on claiming a top four finish come the end of the season, with Arsenal’s visit to Anfield on Saturday (12.45pm KO).

Earning our first trophy in six seasons should mean we aren’t lacking in confidence, and with an FA Cup quarter-final less than three weeks away, there is still lots to play for this season. Victory over the Gunners would maintain the pressure on Newcastle, Chelsea and Arsenal who are all above us in the race for 4th, while defeat to the Gunners would leave us ten points behind Wenger’s side, albeit with a game in hand.

Liverpool’s 2-0 win at the Emirates Stadium earlier this season was our first victory over the Gunners in the Premier League since the 4-1 victory in March 2007. Of the nine games played since that victory, we’ve drawn six (three at Anfield) and lost twice (once at Anfield).

Nine different Liverpool players have scored hat-tricks against Arsenal, while Robbie Fowler has the distinction of claiming the match ball against the Gunners on two separate occasions: in 1994/95 and 1995/96. He also holds the record for the fastest hat-trick scored in the Premier League era 0f 4 minutes and 33 seconds during our 4-0 victory over George Graham’s Arsenal in 1994/95. Peter Crouch is the last Liverpool player to score a hat-trick against Arsenal (March 31 2007) in the 4-1 victory at Anfield.

The rest of this post, containing stats of the two clubs’ records against each other, analysis of form going into the game  and the likely line-ups, is for subscribers only.