Liverpool have won none of the last four league meetings with Wigan, with the last three in a row ending as draws.

The Latics have only scored eight goals in 13 Premier League meetings with Liverpool.

Only Wigan (8.4%) have a lower chance conversion rate than Liverpool (9.1%) in the Premier League this season.

Luis Suarez has won more penalties than any other player this season in the PL (4).

Gary Caldwell has conceded more penalties than any other Premier League player this season (4).

The Reds have lost four of their last five Premier League matches.

Only Man City have lost fewer Premier League home games than Liverpool (1), but the Reds have drawn the most home games this season (8).

32% of the goals Wigan have scored have come from outside the box, the highest proportion in the top flight.

Dalglish made two changes from the previous match. Flanagan made a like-for-like swap with Kelly while Henderson replaced the injured Adam. Both changes were forced, drawing attention to Liverpool’s depleted squad. Lucas, Agger, Johnson, Bellamy, Kelly and Adam all missed the game through injury, with rumours circulating that Maxi has also been absent recently with an injury.

Despite the changes, Liverpool kept their 4-3-3 formation, with Henderson playing just ahead of Spearing and Gerrard to create a sort of 4-2-1-3. Once again, Kuyt and Downing were inverted on the flanks.

Martinez didn’t make any changes from their game against West Bromwich Albion. They retained their 4-4-1-1 shape with Moses and Beausejour on their natural flanks and Maloney playing just behind the lone striker Di Santo. 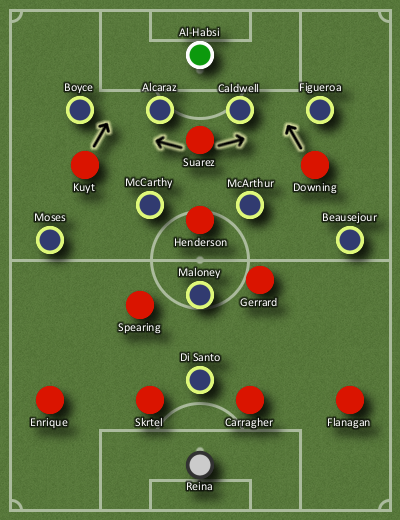 It’s quite common now to see Liverpool start brightly with good intensity and dominate the opening few minutes. Right from the start they moved the ball around quickly and showed fluidity all across the pitch. Even Flanagan tried to get forward, providing forward runs quite a few times. It didn’t produce any dangerous moments, but it did at least give Liverpool another attacking option which Wigan were forced to pay attention to. 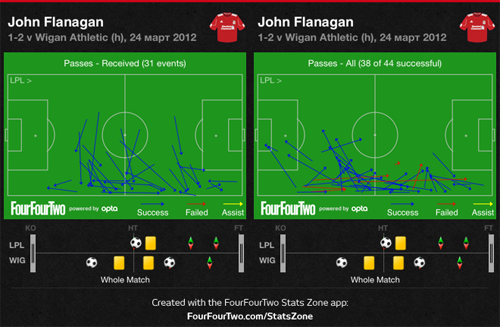 Only subscribers can access the rest of Mihail’s tactical review

In-Depth: Why Are Liverpool Struggling?