The last meeting between these sides was in the Carling Cup fourth round in October 2007, when the Reds won 2-1 at Anfield.

Liverpool are only the second side to reach the final of the League Cup despite playing just one game at home, after Arsenal in 2006/07.

Liverpool are one of only two sides to have won a League Cup final on a penalty shootout, having beaten second-tier Birmingham City 5-4 on spot-kicks in 2001.

Just one of the last seven sides from outside the top tier to reach the League Cup final has won (Sheffield Wednesday in 1991).

There have been five previous winners of the League Cup from outside the top tier, out of 15 who have reached the final.

Their 2-0 win over Blackburn in the quarter-finals this season was Cardiff’s first win in 11 League Cup meetings with top-flight sides.

José Reina is the only player to have played in all of Liverpool’s Carling Cup games this season (6).

Andrew Taylor is the only Cardiff player to have featured in every Carling Cup game this season (7). 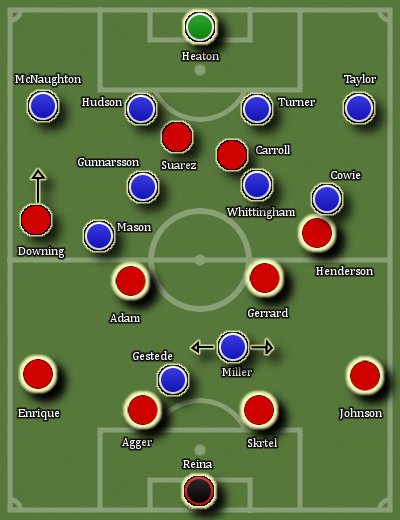 On the Cardiff side, Mackay lived up to his reputation as a fairly flexible tactical manager, choosing to start with a formation he hasn’t been using since the beginning of the season – a narrow 4-4-2 which in defence quickly became 4-4-1-1 with Miller dropping off Gestede, the target-man.

The opening was bright and open, with both teams trying to play positive football and create some early attacks. It was Liverpool who first managed to create anything meaningful, in the 2nd minute when Downing fed the onrushing Johnson around the edge of the box. The full back’s beautifully curled right-footed shot hit the underside of the bar but as so often this season, failed to cross the goal line and bounced out, evading the following-up Suarez in the process.

As the early attacking impulses faded, both team started to settle into their proscribed tactical behaviour and approaches. It’s not a secret that no matter the formation, Liverpool create many chances through the midfielders but still lack clear and cohesive attacking patterns when it comes to taking full advantage down the flanks. So Mackay had well prepared his team for either one of Liverpool’s supposed formations. That was clearly the idea behind Cardiff’s narrow midfield. It was the perfect win-win situation for Mackay and his team. If Liverpool had used the 4-1-2-3, which in recent months they have done more often than the 4-4-2 variants, Cardiff’s narrow midfield would have ensured the team’s central midfield would be flooded and the link between the midfield trio and the front trio easily cut off. This could have forced either the front trio to drop deeper to collect the ball (making the job of Cardiff’s deep-lying back four that much easier), or the fullbacks to push forward that much more often, as a result leaving space behind them for potential quick-breaks down the channels or between the lines, as Cardiff’s narrow midfield could have ensured enough bodies in both zones.

But if Liverpool were going to start with a sort of 4-4-2 (as turned out to be the case), Cardiff’s narrow midfield was going to be tasked with pressing Liverpool’s midfield heavily, suffocating  the midfielders for passing options, forcing them to use direct balls down the flanks (where Liverpool are not yet a clear threat, at least not in the way that they are through the centre) or just to hit the ball upfront, effectively bypassing the midfield area, playing into the hands of Cardiff’s centre-backs (who were clearly more comfortable with the aerial battles with Carroll than chasing shadows after Suarez) and defensive-oriented fullbacks.

Given the starting XI that Dalglish chose, it was clear he and his staff were unprepared (or at least fairly poorly prepared) for such a surprising tactical move by Mackay. But you can’t be prepared for all the potential decisions that the opposition’s manager might or might not take. So it was logical that Liverpool’s management prepared the team for the most obvious likely potential formation and tactics that the opposition had been using recently (TTT member and Cardiff supporter Joe Harrison verified on here that Cardiff have not been playing with a  4-4-2-type formation in the last half a year or so).