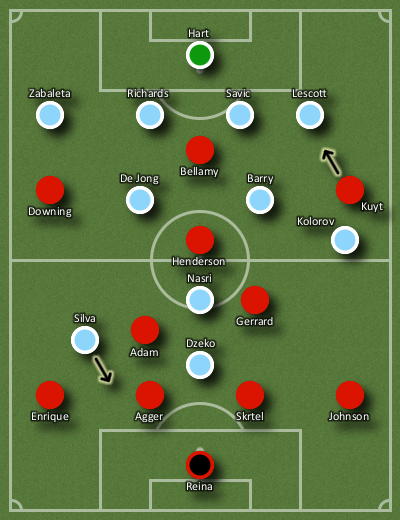 Liverpool went with the same formation they have started every big game with this season – the 4-1-2-3. There were no surprises in the starting line up either, with the only question mark before the match about how the front three would be arranged. In the end, it turned out to be Downing and Kuyt on their “natural” flanks, and Bellamy as centre forward. The alternative would have been to have Kuyt in the centre and Downing/Bellamy as inverted wingers.

On the other side of the pitch, Mancini made some interesting changes. He used a passive formation – 4-2-1-3 – rather than the 4-2-4 that he has used to dominate certain games this season. The personnel were also unexpected. The team sheet suggested lots of possible combinations: Zabaleta could play on either flank or through the middle as a defensive midfielder; Kolorov could play as a full back or a winger. And what would Nasri or Silva do? When they got to the field, Lescott was the left back with Kolorov ahead of him on the wing. Zabaleta was the right back, with Richards playing centre back (with Savic), and Nasri played in the hole ahead of the “double pivot” of defensive midfielders. Silva roamed from the right flank.

As I suggested before the match, the key here was not so much the starting elevens or the formations but the mentality of the coaches. Neither decided to flat-out attack, unsurprisingly given that the score was close and the tie delicately balanced.

Both sides looked to recycle the ball through the middle with patient and probing short passes involving all of the outfield players. Neither pressed heavily, although they would engage when necessary. This is something Manchester City often do in their big games, especially when playing away; while for Liverpool this was business as usual. This allowed City to dominate the opening 3-4 minutes, but Liverpool were dangerous whenever they regained possession. In the fourth minute they countered down the left wing with Enrique pushing forward, and he eventually got to the penalty area to take a great chance; but the shot was awkward and easy for Hart to block. The rebound fell to Downing, but his left-footed shot was disappointed. A minute later, Bellamy broke forward but also failed to deliver anything special.

The key tactical issue, at least from Liverpool’s perspective, was how the midfield three worked in defence and attack. This had been central to the previous two meetings with City, and this one was no different.