There are two ways to gain possession of the ball – steal it from an opponent or intercept it before it reaches an opponent. This can be done either by pressing or by standing off.

“Pressing” is the art of closing down the opponent, denying him space either to receive the ball or do anything once he does receive it. This is sometimes labelled as a “proactive” defensive tactic because the defending team takes the initiative in forcing the opposition to cede the ball. In modern football, nearly every big club does this, especially the ones playing with an attacking mentality, with Barcelona the archetype, famed not only for their superb passing and creativity but also for their ability to win the ball high up the field. They are the benchmark for everything that is “right” in football. Well, according to some.

“Standing off” is the antithesis. In this system the team will pull back to defensive positions as soon as they lose the ball. In basketball we might refer to this as the difference between the full-court and half-court press. Players sag back and protect their defensive zones, waiting for the opposition to come onto them before engaging in foot-to-foot combat. This is a much more passive form of defence (reactive as compared to the proactive pressing approach), forcing the opponent to try something special to break you down rather than making a pre-emptive strike.

Pressing denies time on the ball – standing off denies space in key areas. No team is capable of doing both (even Barcelona), so which one you choose to relinquish is dependent on the relative skill and tactical threat posed by the opposition.

More often than not, smaller clubs tend to adopt the passive approach. This means that the attacking team can enjoy a lot of possession, but it is hoped that possession will be in deep and wide areas where they will not pose much of a threat. Of course, this can be suicide against a really creative team who will patiently pass the ball around until they find a gap.

On the other hand, over-enthusiastic pressing can be just as dangerous. For example, if the opposition has three central midfielders to your two, heavy pressing will pull your midfielders out of position, leaving at least one opponent completely free to wreak havoc in the centre of the field.

This is why I thought Liverpool were right to stand off Brighton in the second half of their League Cup tie this season. Brighton could have all the ball they wanted in safe positions because they lacked anyone of the calibre necessary to expose Liverpool at the back. Since the onus was on them to come at Liverpool and score a goal, the Reds were able to say “let’s see what you’ve got” rather than opening themselves up by pressing too heavily and creating gaps all over the field.

If you deny the opposition space in key areas any team in the world will struggle (as Mourinho proved so brilliantly with Internazionale against Barcelona a couple of years ago). Conversely, if you give good real estate to players with even a modest skill set you will be punished.

With all that being said, my own theory is that, all things being equal, the superior team should look to deny the lesser team space. Even if you concede a possession advantage, their lack of creativity (relative to your own) should mean that you can comfortably defend your goal. Sooner or later their lack of technique will lead to a poor pass or a poor attempt at controlling the ball, allowing you to regain the ball and take advantage on the counter.

But when things are more equal more proactivity is required. Teams with decent creativity and technique will, eventually, break you down if given the time to manufacture enough space. You cannot rely on the bad pass or the ill-judged run. No team can keep 100% concentration throughout the entire match.  Eventually they will pass the ball around, pull you out of position and find that small amount of space necessary to drive a wedge through the defence. Denying the opposition time on the ball gives them less opportunity to dictate the play.

Pressing with a three-person midfield

As I said in my previous article, modern football is all about possession. Formations are chosen to ensure that the team wins this battle, or at least to offset the effectiveness of the opposition’s time on the ball. From a numerical point of view, the three-person midfield is the best way to achieve an advantage in the possession stakes. It has a spare man over the two-person midfield and can at the very least match a three-person midfield player-for-player.

Rafa, yet again, provides a good example of this. His 4-2-3-1 used a midfield trio in the centre not only to control that zone of the pitch in attack but also to assert dominance in defence.

The 4-2-3-1 formation creates a 2-1 triangle in midfield. It is more defensive than the 4-1-2-3 (with a 1-2 triangle) because it utilises two deep-lying midfielders rather than just the one. By doing this, you can cover both wings at the same time as one or both can drift wide to cover any gaps. Doing so shuts down space and time for the opponent. With only one holding midfielder, only one flank can be covered at once, which means any team capable of quickly switching the ball from one flank to the other can play around your pressing patterns and break down a passive defence.

The 4-2-3-1 formation allows you to press with the front four because the deeper midfielders provide a covering base. It also allows the full-backs to come out of defence to close down the opposition because the midfielders can drift to plug the gap. In this way, the pitch is covered both vertically and horizontally because the four covering players (the deeper midfielders and the centre backs) defend the danger zone while the rest of the team chase down the player on the ball and his passing options. No other formation is so balanced. With four covering and six pressing, I will refer to this system as 4×6 for the sake of clarity. 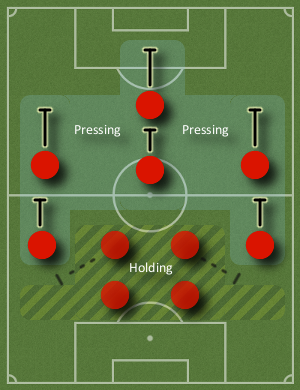 With the 4-1-2-3 you have to focus on the centre of the pitch because your full backs are not able to push on as aggressively. Although it is a much more attacking formation (the two advanced midfielders can both offer creativity and drive through the centre), it forces the opposition to drift wide where there is more space. In this zone the opposition will get more time on the ball because of the passivity of the full backs in the defensive phase. So, the team has to utilise five covering defenders (the back four and the holding midfielder) while the other five press. Or, to continue with the nomenclature, a 5×5 system. 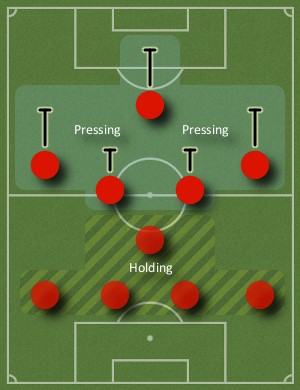 When used by a proactive attacking team, both of these formations focus on heavy pressing by the advanced players in order to deny the opposition time on the ball. They also use their deeper players to cover the dangerous areas in the centre of the pitch in front of the goal by using the extra men in the midfield. The effects of this can be magnified when they play against the 4-4-2.

Passive sides, however, have a slightly different outlook. The midfield and defence will push close together in their own half, creating a very congested area in the centre which will be hard to penetrate. This will tend to “flatten” the triangles, but it will still be possible to send a deeper midfielder out to the wing or have one of the advanced midfielders step out of the line and close down the opposition. That is because there are enough bodies in the centre to cover if one leaves the line. As a result, both formations are equally suited to playing a “standing off” game.

Standing-off with a two-man midfield

In theory, a 4-4-2 is especially vulnerable to diagonal balls played into the channels. To prevent this teams tend to defend by creating two banks of four which are tightly packed together. This is,  I have argued, the best defensive formation. But in order to pull this off, the team needs to be incredibly well disciplined and it needs to play with a stand-off mentality. It also means the side tends to be rigid and static, which isn’t always the best thing for a side looking to attack.

Case For The Defence