Some stats before the match: 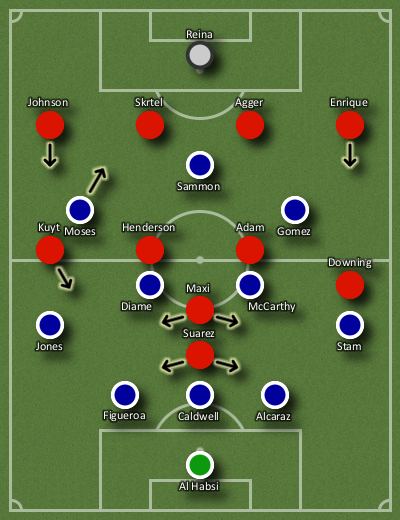 Unsurprisingly, Martinez opted to continue using his recent brand of the 3-4-1-2 formation, instead of his more traditional 4-2-1-3. He started with the same starting XI as against Chelsea in his previous home game.

On the red side it was interesting to see what formation and approach Dalglish and his staff would use for this match, especially as the manager himself attended the Wigan-Chelsea encounter last weekend. In the end the starting formation and style were a bit of a surprise – Downing and Kuyt played on their “natural” flanks, with Maxi roaming in the hole behind the lone false nine Suarez.

The start of the match was interesting, mainly because with both teams heavily possession-orientated, lots of short passes were preferred, even given the poor state of the pitch. From the beginning Liverpool began to dominate due to their intention to press heavily and win the ball high up the pitch. As a result the whole team (including the central defenders) were high up the pitch, making it easier for the players to recycle using attack-orientated short passing.

With Liverpool establishing  dominance in the first ten minutes (the statistics showed that the ball was in Wigan’s half 58% of the time), Wigan soon reverted to their passive behaviour, dropping deep with a five-man defence (the three centre backs plus the wing-backs), shielded by the two deep-lying midfielders. That left the front trio, which in fact became a 1-2 in defence, as Gomez dropped deeper and more central to act as a link, while Moses roamed around Sammon to be the focal point for possible counter-attacking passes from deep.

Now Liverpool found themselves very restricted for space in the last third, as Wigan’s defensive wall found it all too easy to suffocate Liverpool’s attacking players, the back three shutting down the space between the channels, the wing-backs (now fullbacks) restricting Downing and Kuyt’s space to play down the wings and the two deep-lying midfielders tracking back to cover Maxi’s roaming runs. Effectively it was a 7 v 4 situation.

Liverpool found it extremely hard to break down such a defensive wall. Enrique and Johnson began pushing forward to try and create advantage down the flanks, while Adam and Henderson tried to do the same through the centre, trying to take the attention of Wigan’s two holding midfielders off Maxi. Downing and Kuyt started to swap their positions often too.

But whilst in theory this could and should have delivered a tactical advantage for Liverpool (2 v 1 situations down the flanks stretching Wigan’s back five; 3 v 2 or at least 2 v 2 through the centre giving more room for Maxi to directly support Suarez upfront), in practice Liverpool’s movement and passing became surprisingly poor, and they lacked cohesion and proper timing in everything they were trying to achieve, whether the exchange of passes, interchanging etc.

Suarez 'Is Not A Racist'