“It is key to note that Patrice Evra himself in his written statement in this case said ‘I don’t think that Luis Suarez is racist’.  The FA in their opening remarks accepted that Luis Suarez was not racist.”

It seems to me that one of the toughest things to prove in life is that you’re not a racist. So keen are we to clamp down on the vile nature of racism, we don’t really give a comeback to those accused of it; it’s an accusation that sticks. If it’s just your word against your accuser’s, what can you do? How do you prove you didn’t say something? – because the absence of evidence means nothing.

Most of the things we say are not captured; although, with loads of cameras on us, the chances should be higher, and the absence of evidence should present some doubt. If you were taking part in an event filmed by a dozen cameras for 90 minutes, then if 10 accusations were made, there’s a chance that they’d be picked up. None were on video (and I know a source who has forensically studied the footage at the FA).

Claims that you have black friends just sound hollow and laughable, although presumably racists don’t have many black friends. Personally, I thought that the emergence of the fact, via the club’s official statement, that Luis Suarez’s grandfather was black was quite profound, because it means he has close black ancestors (rather than many millennia ago for the majority of the rest of us). That made me think it less likely that he’d racially abuse someone, seeing as he shares that race in his DNA.

It doesn’t make it impossible, of course, but as those genes were passed down, to become ‘part’ of his DNA if not as clearly reflected in his skin colour, then I’d expect that to make him more sensitive to the issue. Say that you were basing the judgement on the benefit of doubt; then it would add at least some uncertainty to the equation, just as there’d be uncertainty that a ‘decent’ chance of being captured on camera failed. He has lots of black friends and a black grandparent; not exactly the profile for a racist, even if, in Suarez’s case, they are dismissed as mere excuses.

More uncertainty would arise with the complexity of the word allegedly used: ‘negrito’.

By all accounts – from many who live in South America, and several linguistics experts I’ve read on the issue – negrita/negrito doesn’t necessarily mean black in Uruguay. It’s now often used for black and white people alike; unlike the n-word, which is offensive when used in hate, but is also ironically used by black people ‘reclaiming’ it. But the n-word definitely refers to the colour of skin.

Whereas negrito, in Uruguay, does not; not definitively, according to many sources. It is often used to mean friend, or lover, or mate, with the skin colour irrelevant. We can use ‘mate’ even when insulting someone, either just as a placeholder or perhaps in irony (‘alright, pal?’), when of course it’s not being friendly. But if the word ‘negrito’ has a blurred meaning, then it’s hard to say with certainty that it was meant with racial intent, or just ‘mate’.

That the conversation took place in Spanish, and not English, also affects the issue. Yes, it was on English soil, so people will say that the meaning of the word in our language only applies here. Ignorance of the law is no defence, but as the conversation took place in Spanish, then surely the nuances in Spanish (and in particular, the Uruguayan dialect) have to come into play. Or so I’d have thought. The reason Suarez admitted to saying it, and has been surprised at the verdict, was because he felt it wasn’t used with racial overtones. I’m sure Liverpool thought they’d proved that.

Then there’s Evra. He’s alleged to have insulted Suarez via his place of birth, and said that the referee was only booking him because he was black; I’m not sure of the truth in this, although the Liverpool statement suggests he admitted to insulting behaviour towards Suarez. Even before the start of the match he was ranting and raving, and at one point provocatively kissed his badge to a section of Liverpool fans. He looked like someone eager to start a fight.

He’s been involved in previous racist claims, although none were made directly by him. However, one of the FA panels said he gave evidence that was ‘exaggerated and unreliable’.

Does that mean that he’s doing the same this time? No. However, does it lead to some doubt?

Just as Suarez appears to have been found guilty on the basis of past misdemeanours (my assumption, but it seems that there’s a witch hunt), Evra has apparently let himself down at a previous hearing.

However, while Suarez has ‘previous’ for lots of things, there have been no accusations of racism. Again, absence of evidence doesn’t mean absence of an offence, but there’s no other evidence in existence that suggests he’s a racist. And in this case, just one man’s word against another’s, and a word with many meanings.

Okay, so there’s doubt based on the lack of video/audio evidence, with ‘he said, she said’ being largely unreliable in the justice system (not that this was as thorough as a full judicial process). Doubt based on Suarez’s happily mingling with people of all races and his mixed-race (grand)parentage. There’s also some doubt about Evra’s credibility, even if that doesn’t prove he was misleading this time. There’s a little more doubt, as Suarez has no history of this offence; repeat offenders are more likely to continue their recidivist ways.

That’s a lot of doubt. Enough to gain the benefit?

However, Suarez didn’t have to be proven guilty “beyond the benefit of doubt”. This was not English justice, but a sports tribunal. He did not get given the chance to defend himself to a jury of his peers. He faced a small panel, that was not fully independent or without its agendas (such as taking on Sepp Blatter on the issue of racism, and perhaps using this to prove a point). The fact that this was such a tricky issue perhaps made the procedure insufficient; at least John Terry gets to go through a more established process.

People are wrongly convicted of things all the time, especially with only verbal accusations. Cases are frequently overturned; initial guilty verdicts can be appealed, and are often successful.

But once tarnished, it sticks.

Chairman of anti-racism group Kick It Out Herman Ouseley said:

“This charge is not saying Luis Suarez is a racist. It’s saying, on this occasion, he used racist language. It doesn’t make him a bad guy – he needs to learn what is acceptable.”

That almost suggests that he could have inadvertently used racist language; he needs to learn that words have different meanings in England.

But still the headlines scream “RACIST”. The player will now be hounded, wherever he goes.

[Postscript: Sorry if this is garbled, and full of typos, on what is a serious and sensitive issue. It was written in difficult personal circumstances, and late at night. Hopefully the whole Suarez/Evra ruling will be further explained in the coming days, so we at least know if there’s any independent evidence. Club allegiances need to be put aside over issues like racism, but the fact remains that Liverpool fans have many doubts about what might have been a kangaroo court, and trial by media. If my bias has clouded my judgement, I apologise, but I genuinely want to see people to only be proved guilty of serious offences beyond a reasonable doubt.] 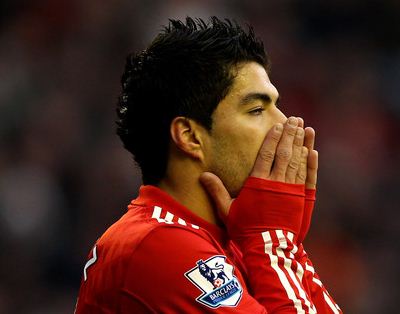