Queens Park Rangers had won just one of their previous 20 league games at Anfiled, and have won only one Premier League match at all against Liverpool. Liverpool themselves may have felt like they were due some luck having hit the woodwork 12 times this season – more than anyone else. 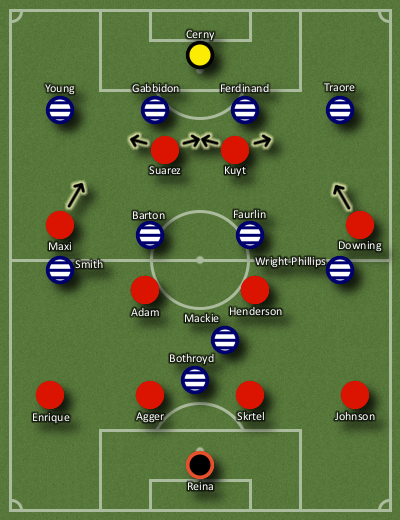 Both teams went, unsurprisingly, for variations upon 4-4-2. Warnock threw a slight curve ball by leaving Helguson out of the starting line up, while Taarabt also failed to start. Their places were taken by Bothroyd (as the lone striker) and Mackie played just off him.

For the hosts, it was interesting to see how Dalglish coped with the injuries and suspensions to his central midfielders. In the end, he decided to go 4-4-2 with two false nines and two inverted wingers.

Liverpool dominated from the off, creating a host of chances. In the first two minutes their put pressure on Rangers following consecutive corners, which caused some danger moments in the opposition’s area.

In the first ten minutes Liverpool were so direct and quick with their attacks every time they regained the ball that, in essence, they were counter attacking despite dominating possession. The plan was to catch QPR’s defence in bad positions as soon as possible by surprising them with their pace. In this period, one of Henderson or Adam would push forward and provide more bodies up front. In just such a situation in the tenth minute, Downing, Kuyt and Johnson worked the ball down the right with exchanges of passes. This culminated with a good ball through for downing who crossed from an excellent position to the unmarked Suarez. Sadly, his header wasn’t strong enough and the ‘keeper easily collected.

After the frantic opening period, Liverpool began to calm things down a little by recycling the ball more. They would then hit the ball forward to create fluid attacks, and the tactical patterns looked much clearer and well thought out than in recent weeks.

First, it was clear how well Liverpool managed to stretch the opposition down the flanks, even though the wingers were inverted, and so theoretically should have offered less width. Two of the front four always hugged the line when the team was recycling the ball in deeper positions, hoping to take advantage when the forward ball was played. On the right, it was generally Downing who held a wide position; on the left the other three players rotated, with the two more-central players looking to work the channels. All of this forced QPR’s two banks of four to play very wide to cover as much of the field as possible; but that opened up space in the middle that Liverpool could exploit. Adam or Henderson would regularly push up from midfield to do this.