Maybe it’s the incredible start made by the Manchester clubs, or maybe it’s just that there are a lot of idiots out there. But I cannot abide the doom and gloom that follows one bad result, particularly when it was not a bad performance.

It’s not just the knee-jerk fans on Twitter, whose reaction to anything less than 114 points a season is rapid implosion; two respected broadsheet newspapers ran execrable pieces on the Stoke game.

Russell Kempson, writing in the Independent, sets the scene by paraphrasing Liverpool fans:

“Kenny Dalglish, Liverpool legend. He rescued us from Roy Hodgson and will return us to the promised land of a top-four finish in the League and a natural resumption of Champions League hostilities in 2011-12. Our rightful place, where we belong.”

Having set Dalglish up to be a man who can do no wrong in the eyes of Kopites, he then says:

“But the facts – as yet – do not back up the blinkered idolatry. The defeat against Stoke City here on Saturday was Liverpool’s eighth loss in 28 matches since Dalglish sifted through the Hodgson debris and embarked on his emergency salvage operation.”

Incredible – just truly incredible. Why would you focus first on the negative, taking it out of context of the overall picture, which is not negative when view as a whole? Surely the wins, draws and defeats are all part of one single reality?

Up to a certain point, the amount of games lost has no bearing on league success; the table works on points won. You could lose 8 games and win 30, and you’d win the title. (Liverpool lost only 2 games in 2008/09, fewer than the champions, but that didn’t stop Rafa getting criticised; Liverpool were excellent that season, but sadly for us, United were slightly better.)

Kempson sets the scene with talk of the top four. His entire argument, set out by that paragraph, relates to qualifying for the Champions League. So why isn’t he focusing on league form? Why is he including the Europa League, which was of little consequence last season, and cup games, which included a visit to Old Trafford as soon as the manager had stepped into the breach? You don’t qualify for the Champions League by winning cups.

Liverpool, who currently sit 5th (miles away from the top four, clearly, although my maths can’t calculate the distance), have won 40 points in 22 games since Dalglish returned.

Over 38 games, that would equate to 69 points. And in the history of the Premier League since four spots were available, 69 points has meant certain Champions League qualification.

Let’s go back, and remind ourselves of what Kempson said:

“But the facts – as yet – do not back up the blinkered idolatry.”

… Except they do, if the blinkered idolatry referred to was outlined in the opening gambit. I mean, if you’re going to use facts, at least get the bloody things right.

But there’s more. This is 69 points (pro rata) achieved without Steven Gerrard for all but a couple of games.

It is 69 points (pro rata) achieved with an injury crisis at the end of last season, and a squad that included a mix of the sublime, the good and bad signed by Rafa, and the raft of duds signed by Hodgson, none of whom feature anymore. It included a month with no fit strikers, as Fernando Torres slung his hook.

It also ignores the fact that Liverpool absolutely smothered Stoke, with the vast majority of the possession, territory, shots (11 on target to one for Stoke – the penalty) and corners, but a case when finishing, rather than tactics, let the club down. Had the incredible Luis Suarez not missed a good chance at the death – in keeping with when Steven Gerrard hit the post at 0-0 on the same ground with the last kick of the game following ‘Rafa’s rant’ – then there’d be no story here. Instead, there’s a storm.

Whether or not Dalglish repays the fans’ faith and idolatry is yet to be decided. But so far, all the evidence – which Kempson refers to, but fails to correctly analyse – actually disproves the author’s own thesis. (Or, should that be, half-arsed idea scratched on the back of a fag packet?)

Dalglish took over when the Reds were 12th. He took them up to 6th, and now has the team sitting 5th. Obviously this is the clear pattern of a man who doesn’t know what he’s doing – who is ruining our club while we blindly sing his praises.

But it gets worse. Writing in the Guardian, Sachin Nakrani said:

“…That may come as a relief to the 60-year-old [Dalglish] but for his admirers there may remain concern over his loss of temper, the sense, even, that for the second time in two decades the task of managing Liverpool is proving too great a responsibility for the club’s greatest player.”

Wow. I mean, seriously. Wow. Manager loses temper after defeat and shows frustration with officials. It can only mean one thing: he’s having a nervous breakdown and cannot handle the pressure.

In which case, roughly half of the Premier League’s managers have a nervous breakdown every weekend, and come May, each and every one of them therefore needs be sectioned for his (and society’s) safety.

To bring up Dalglish’s post-Hillsborough stress is despicable. In the aftermath of the tragedy his management was affected, because he was still living amidst the consequences and was physically ill from the stress of having to deal with the deaths of almost 100 Liverpool fans. But 22 years have passed. If anything, the experience should now make him stronger and wiser. To any sane observer, that seems to be the case.

When things aren’t going his way, Alex Ferguson rants and raves at journalists, swearing at them, and when he’s upset with his players he throws boots in their faces, but he’s just a winner, showing his winning mentality; not ‘losing the plot’ in the way that others are when they show a bit of emotion. Dalglish moans that, for the 4th game running the Reds have been denied either a penalty or an opposition red card, and he’s having some kind of mental collapse that suggests he can’t handle the job. Whether or not he is right about the refereeing decisions, he’s just doing what managers do.

So, dear readers, I apologise for my optimism under Dalglish, which has seen me claim that the Reds can reach the top four under his guidance, after the nightmare of being a bottom-half team last season before his arrival.

Clearly, having read this morning’s newspapers, he’s ruining Liverpool, and needs to be sacked forthwith. I hear that Roy Hodgson won a game this weekend; presumably he’s now the man for the job? 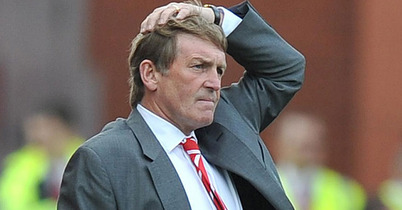