This match was a must-win for both teams. Liverpool were obviously trying to keep themselves in touch with the European places. For Arsenal, three points would keep them in the title race. Despite not losing in the Premier League since December, Arsenal’s form was poor coming into the game – too many draws have, ultimately, seriously damaged their chances of winning the league.

Of the 14 matches since they were last defeated they had drawn six, dropping 12 points.

Liverpool’s form was much better than it was at the beginning of the season. It would be foolish to say that the revival under Dalglish is complete, but there is no doubt that results and performances have improved considerably. The Reds had won seven matches since the turn of the year, including an excellent 3-0 win against Manchester City last week with an Andy Carroll brace. However, they’d also lost two of their last five, including a defeat to relegation-threatened (and Roy Hodgson-managed) West Bromwich Albion.

More statistics are available in Gary Fulcher’s always-excellent pieces on the site. 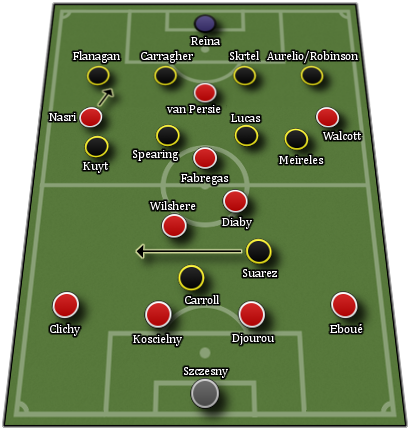 Szczesny and Djourou were back for Arsenal, while Arshavin was replaced in the starting line up by Walcott. Liverpool, meanwhile, were unchanged from the 3-0 win against Manchester City.

Arsenal provided no surprises tactically. Only Walcott offered something different to the usual Arsenal plan – short passing, patient attacks, trying to tease out the perfect ball to someone either over the top of the defence or through the channels. 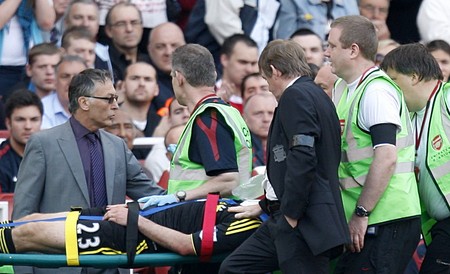