By Kais. Liverpool were unable to continue their excellent recent run of wins under Kenny Dalglish, but despite the slightly disappointing result and some underwhelming passages of play, the full debut of Luis Suarez, allied with Meireles’ glorious goalscoring form, provided quite a few positives for Liverpool supporters to savour.

Kenny Dalglish reverted to a back four in this match – three centre-backs would understandably have been superfluous against Wigan’s lone frontman, Hugo Rodallega – and so Jamie Carragher replaced the indisposed Agger alongside Skrtel in the centre of defence. The midfield was assembled in the same diamond shape – principally in the first half – as it had been against Chelsea, with Lucas Leiva utilised as the deepest and most defensive midfielder, Maxi and Aurelio deployed as narrow shuttlers on the right and left respectively, and Meireles taking up his now customary position behind the striker(s), at the apex of this midfield diamond.

Kuyt partnered Suarez upfront in what was ostensibly a two-man strikerforce, but with some tactically exceptional distinctions. The flexible nature of LFC’s shape, by virtue of the movement in midfield and attack during various stages of the match, implied a 4-1-2-1-2/4-2-3-1 hybrid formation. 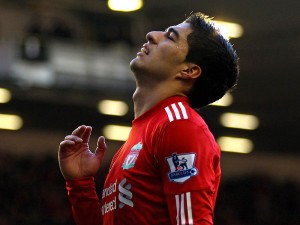