By Dan Kennett. In the light of Liverpool’s recent involvement in the transfer market, as well as being involved in two of the biggest transfers of all time, I thought the time was right to put this into context using Transfer Price Index.  As we all know, Cristiano Ronaldo is the most expensive player in the world. Meanwhile, our £85m of dealings on transfers deadline day ranked Torres in 4th and Carroll in 8th. 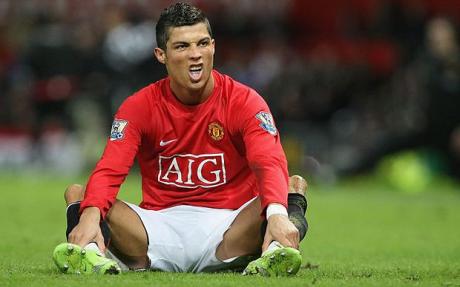 As the January transfer window has closed, and this season’s dealings are concluded, Graeme Riley has been able to calculate football inflation (or Transfer Price Index© ‘TPI’) from 1992-2011, meaning that Current Transfer Purchase Price (CTPP) is now in 2010/11 prices whereas Pay As You Play (PAYP) converted everything from 1992 onwards to 2009/10 prices. (For those still unfamiliar, the concept of TPI is explained in this extract from the book: the Introduction and Chapter One.)

The average price of a Premier League transfer had dropped in 2009/10, after three consecutive years of rises, but once again the figure is on the increase. This is the first airing of the brand new 2011 prices.

Some key notes to make on this article:

1) TPI is only for Premier League inflation so inflation for European leagues is likely to be different, especially for Serie A as their financial dominance that ran for 30 years from the 1970s to the early noughties is well and truly over. However TPI will at least give us a more than reasonable indicator.

2) My starting point for assembling the data was the progression of the world record transfer fee Maradona > Baggio > Papin > Vialli > Lentini etc.  TPI only starts in 1992 so the inclusion of pre-1992 transfers is even more approximate.  These figures may only be 80% of their CTPP or even less

3) When you look at European sites for record transfers they are very different to British sites as they track the record in EUR not GBP.  As we know in the cost of travelling in Europe, the exchange rate is much closer to 1:1 today than when the Euro was launched as an accounting currency in 1999.  Hence the EUR rankings are significantly different to the GBP ones

4) This isn’t meant to be a definitive ranking.  Only maybe the top 6 or 7 could be considered definitive.  Maybe only even the top 4 or 5. It’s a list of the top 10 European transfers plus the highest ones from the TPI database plus a few others thrown in for fun e.g. Maradona to Napoli in 1984.  Domestic deals like Carrick (to United) and Wright-Phillips (to Chelsea) will still rank above Carroll in CTPP.  European deals like Nedved (to Juve) and Mendieta (to Lazio) are both not in the top 10 “biggest transfers” yet would probably both rank above Torres in CTPP 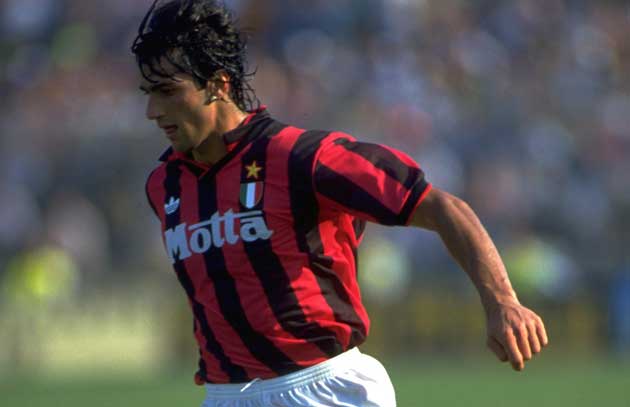 * Cristiano Ronaldo the most expensive transfer?  Not in CTPP it isn’t.  Step forward none other than Gianluigi Lentini (ask yer Dad, kids).  Lentini comes in at circa 105m GBP, still the only player to be valued at more than 100m GBP

* Making up the top 5 are two other transfers from that crazy Serie A summer of 1992 when the world record was broken 3 times in a month.  Gianluca Vialli c97m GBP and Jean-Pierre Papin c81m.

* Fast forward a few years to the turn of the century and the original galacticos start to make their appearance.  Luis Figo (c80m GBP) and Zidane (c72m GBP)

* Ibrahimovic and Kaka, the 2 other players above Torres in the “traditional” highest transfers are 7th and 9th, either side of Shevchenko 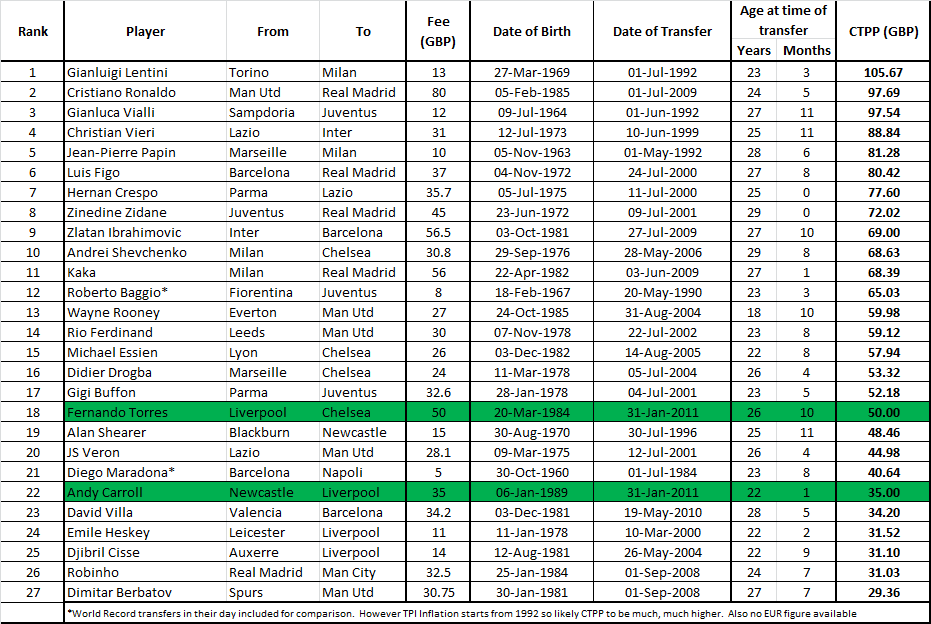 * Due to them being pre-Euro (note 3) I left Lentini/Vialli/Papin out of the EUR charts.

* Even without the three 1992 players mentioned, Ronaldo slips down to 5th (note 3).

* The top 4  are all 2001 deals or earlier when the GBP/EUR rate was closer to 1.5.  However they are in the same order as in the GBP charts: Vieri; Figo; Crespo and Zidane

* £50m for Torres is the 4th biggest GBP cash transaction in history.  However when you consider that he’s only the 4th biggest CTPP signing for Chelsea (coming in behind Shevchenko, Essien and Drogba) it shows you just how much Chelsea have spent in the past

* Torres isn’t even the biggest CTPP centre forward transfer. Domestically, PAYP proves that Shevchenko, Rooney and Drogba all rank higher than Torres in CTPP.  Across Europe Christian Vieri to Inter in 1999 is streets ahead at circa £80m. Even considering notes 1 and 3, Crespo and Ibrahimovic are other deals that are probably higher 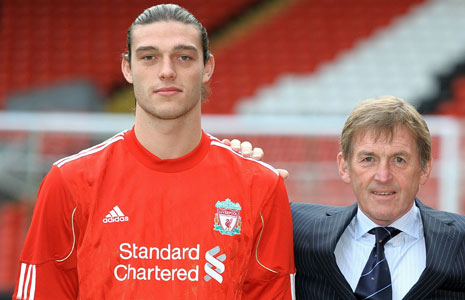 * Andy Carroll is definitely Liverpool’s highest CTPP signing at £35m. Despite the huge cash outlay in 2011 terms, it still shows you that LFC aren’t buying at the top, top end of the market.  I haven’t converted all the top deals in PAYP to the new CTPP [those figures will be available later in the season] but my estimate is that Carroll would only just break into the top 20 deals in Premier League history.

* Like Torres, Carroll does have direct comparisons in terms of CTPP and Age. Sadly it’s not Alan Shearer but Emile Heskey and Djibril Cisse: both were aged 22 when they moved to Liverpool and both had CTPP of over £31m. Let’s hope that Carroll proves to be a much better signing than both of them combined.