By Taf McDonald (Invincible Bastion). As matters on the pitch improve, matters off the pitch returned to the spotlight recently following the announcement about the creation of a fans’ committee. Such a committee had been on the cards since the NESV (now FSG) takeover. The recent announcement has been almost universally well received by the fan base, albeit sceptically in some quarters.

When the idea was first suggested, it looked likely that any committee would be formed by and include the likes of Rogan Taylor. The outspoken expert on football business (who lectures at Liverpool John Moores University) initially looked a sensible option given his areas of expertise. However, the idea was met with a lukewarm reception by supporters, with many questioning why the committee should be filled with ‘the elite’ of the fan base; after all, they only represent a tiny fraction of our worldwide pull. It appears the club’s hierarchy have acknowledged this, with the committee structure now planned to comprise 17 individuals (up by one from the original 16 after the late inclusion of a female category, a Gray and Keys-style omission) from different fan sectors.

Given our recent experiences, it is understandable why a fair level of scepticism and a healthy caution remain, and why we should  welcome  a full analysis of situations off the pitch, just as we would expect to review our on-pitch problems as they arise. However that is not to say that we should think of John Henry et al’s stewardship as being anything remotely like Hicks’ and Gillett’s.

So now we’ve been presented with a notion of a fans’ committee, the question is how is that to be interpreted – for good or for bad?

There is no escaping the fact that the UK has changed substantially from the manufacturing powerhouse it once was. As the UK evolved into a services-based economy, football has also evolved. The ‘working class’ of the UK is now represented by analysts, managers, I.T. programmers and so on. Meanwhile the game’s following has expanded not only from a geographical point of view, with fan bases no longer drawn almost solely from the local region or even just the UK,  but it’s also crossed gender, age and class boundaries. My grandmother in her 30’s saw football as a working man’s game and had no interest whatsoever in the sport. Yet in the years running up to her passing she never missed a televised Liverpool game.  Much the same can be said for my mother and I’m sure these changes are not localised to the North Wales and Merseyside areas. More people than ever have switched on to the sport. Times have changed.

As someone who has studied the club and football in relation to its off-field activities, I have long been calling for changes to football’s business models, especially with regard to improving communication channels. The proposed committee has the potential to achieve greater fan interaction and communication. Interacting directly in a formal forum represents a bold move by the club. Of course the club must remain open to listening to all fans, particularly when they talk in unison on certain matters, but this step should enable the wider fan base  to feed-in opinions and ideas  to the 17 individuals who can then discuss them fully with the club’s hierarchy.

This could be a masterstroke by Fenway Sports Group. In much the same way as corporate organisations created value in the ’70s by listening to and learning from their employees, rather than subscribing a fixed solution, there are skills, abilities and opinions within the fan business which can deliver value. Add to this the idea that any business should be listening to its customers to ensure they can meet their wants (particularly important for the commercial elements of the club’s business) and you have to wonder what the downside to this plan might be.

There will be one though, there always is. It will not be without its critics.  I’m sure some in some quarters will resent it, while others will accuse the club of only paying lip service to their responsibilities. Those who are appointed to the committee will no doubt have to ‘thicken their skins’.

If this is a genuine attempt to improve the club by listening to the fans then the club should be congratulated on a bold move.  The benefits and value which could be delivered though should easily outweigh any potential downside.

But…. what if this is not a bold attempt to think and act differently but a cynical strategic masterstroke to deflect fan pressure? Towards the end of the Hicks and Gillett era, fan pressure really told – we should not underestimate the pivotal role played by the fans once the majority of ‘fence sitters’ jumped down and said ‘enough’. Thus, what FSG took over was a club with potentially dwindling revenues in the short term and a militant fan base that had already showed what happens when you cross it. If the club can get its act together on the pitch (yes I know that oversimplifies it – but you get what I mean), the revenues will take care of themselves. But another fan uprising could cause significant harm to FSG’s investment as well as their reputation.

From a strategic point of view, the formation of a fans’ committee could well nullify the other fan groups. At any future time of unrest, fence sitters are much more likely to either remain on the fence or fall down on the side of the club, if they can see other things happening. Groups such as Spirit of Shankly and Save Liverpool FC had been ‘banging the drum’ long before they were able to gain the major populous support around the world to really apply the required pressure.

The more cynical amongst us would also point out that the club retains overall control over who gets removed from the application process, before they are submitted to the selection panel. The ‘quality’ of the panel is likely to give a strong indication of how effective, vocal, and most importantly persuasive it will be as a fan voice. The ‘proof of the pudding will be in the eating’ as they say. There are certain fans who you would expect to see on the panel. I’m not talking about the really militant fans, but well informed, educated and reasonable fans. I have a group in mind and I would expect to see at least one of that group appointed to the panel.

Having read about FSG’s operations before this, I am hopeful the fan panel will be a true representation of their ability to think and act innovatively and differently. But judgement must be deferred, even beyond the announcement of who will sit on the panel, until we can see how well the panel performs – most notably, whether it can question and challenge the club effectively, and ensure the meetings are a two-way discussion forum and not just some limp exercise in fan appeasement. 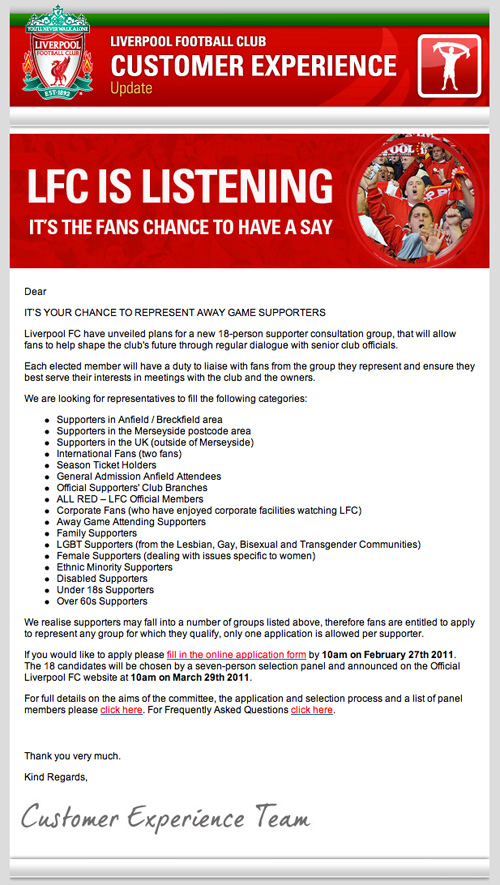