By Andrew Beasley (a.k.a. beezdog)

Following the first two league games of the second Dalglish managerial era, something worrying occurred to me: in both games we had taken the lead, only to subsequently conceded twice and go behind.

Don’t panic, this is not a rabid, foaming mouthed ‘DALGLISH OUT’ rant; rather a look at how Liverpool’s defensive record has shifted for the worse overall this season. I don’t profess to have all of the answers as to why, but I’ll share some relevant statistics I have in the aim of encouraging smarter people than me to get to the bottom of it. (While, at the same time, Liverpool’s new coaching and management structure work on addressing the problem.)

Let’s start with a look at the key problem – number of goals conceded: 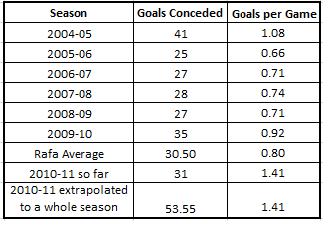 Dear oh dear. Liverpool have already conceded more than they did in four of the six Benitez seasons, and matched the average figure for a full season, despite still having sixteen fixtures to play. Indeed, if they carry on at the current rate, then we can see that they will concede around double the amount of goals that Rafa’s team did in their four best league seasons.

Liverpool have been on the wrong end of more hidings (e.g. conceded three or more goals) than in previous years too. This occurred in four of Roy Hodgson’s twenty league games (20%), yet this has only happened to Liverpool fifty times in 716 Premier league games overall (6.98%).

But why has this downturn occurred?

My previous article (Roy vs. Rafa: Endgame), suggested that this could be down to the Reds having less possession in games, and defending deeper. Another change has been the switch between zonal and man-to-man marking.

Last season, Liverpool conceded sixteen of their thirty-five goals against from set-pieces (45.71%). So far this season, they have conceded eleven set-piece goals. If they continue the season at the same rate, then by the end they will have conceded nineteen.

Some people might think that the defensive problems are down to the absence (for very different reasons) of two key players this season: Jamie Carragher and Javier Mascherano. The loss in form of one Pepe Reina may have contributed too, so I have looked at these three player’s statistics to try and determine what impact these issues may have had.

A lot of people assumed that Liverpool would massively miss the Argentina captain, and even more so once his replacement turned out to be a 30 year old Juventus cast-off. After all, he won the most tackles in the Premier League last season (144), and that was in the club’s least successful season of his time here. But how did Liverpool cope overall without him in the league during the three full seasons he had at Anfield? 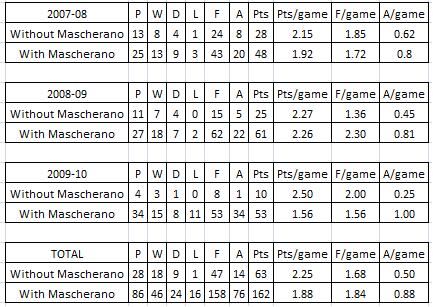 Perhaps a little surprisingly, Liverpool earned more points and conceded fewer goals on average without Mascherano in the team. The interesting statistic here is that Liverpool only lost one of the matches they played without him in the side; a closer look reveals it was an away game at West Ham in January 2008, where Liverpool only lost 1-0 thanks to a last minute penalty. The Masch-less Liverpool were within one minute of an unbeaten league record, which is very impressive.

Mascherano missed an even split of fourteen home and fourteen away matches, and to give some context to the difficulty of these games, he missed two home games with Everton, two away at Arsenal, and one home game with Chelsea, but he did play in all six against Manchester United. On average, he tended to play in the tougher fixtures.

I can’t say conclusively that Mascherano has been missed (indeed I think he has), but the Benitez team certainly managed without him reasonably well; this year’s side don’t appear to have done so.

The analysis of Carragher’s influence has to be slightly different, in light of the fact that he missed so few league games in the Benitez era; he played no part at all in just seven of Rafa’s 228 league games in charge (a mere 3.07%). Instead, I will present the statistics from so far this season, where he has missed seven league games already.

The evidence shows that Liverpool have earned fewer points and conceded more goals without Carra in the side; in fairness, they have also scored more goals too. Whilst seven games is clearly too short a spell to provide serious statistical analysis, when you consider the seven teams we have played, I think it’s right to be a little concerned about these defence stats:

It’s hard to foresee a much kinder run of seven fixtures at any point in any season, especially considering that four of the seven matches were at home, and yet we’re averaging over 1.7 goals a game against.

Of course this can’t all be down to the absence of Carragher, but at the same time whatever you might think about him, it’s hard to argue that he knows how to organise a defence, and on a purely defensive basis, is probably still our best centre-back.

There’s also no doubt there’s some relevance in the facts that Agger is returning from injury, Kelly is a young lad trying to find his way in a struggling team, and Paul Konchesky’s mum does his talking for him on Facebook. But as the only player who spanned the entire Benitez era, which was defensively sound by-and-large, Carragher was definitely doing something right. 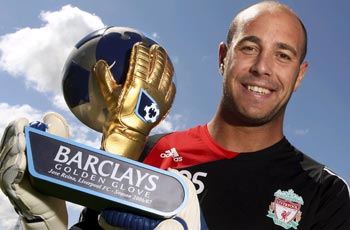 In his five full seasons in England, he has won the Barclays Golden Glove award outright three times, shared it once more, and only missed out on a share of it by one clean sheet in the other season (hence Carra having a go at Arbeloa at The Hawthorns in 2009). In short, both he and the defence in front of him have done outstandingly well during his time in England.

But not since the departure of Benitez, and what part has Pepe’s personal form played in this defensive dip?

Roy Hodgson and his goalkeeping coach Mike Kelly are alleged to have wanted Pepe to keep goal in a more English fashion. The stats suggest they have succeeded in this, as they appear to have made him worse.

What we can see from these stats is that Reina has conceded a goal for every 1.74 saves he has made this season, which is by far his worst figure since signing for the club.  This would explain why we’re conceding over a goal a game on average, because any team you play, no matter how good or bad or be it home or away, will inevitably have at least a couple of shots on goal.

Back in 2006 he was making nearly four times as many saves between goals. In fairness, some of this will be down to the team giving away fewer chances than in some previous years.

Unfortunately I don’t have the stats for shots off target by opposing teams, else I could properly see how the number of chances Liverpool have allowed against them has changed over time. And of course, the quality and execution of those chances is important in understanding how much of a chance a goalkeeper had in stopping them.

The figures I do have show, rather worryingly, that if this season’s record carries on at the same rate, then Reina will have conceded 53.55 goals compared to his average of just 26.80 under Rafa, yet the number of on target chances against him will be virtually the same (146.82 to 146.20).

Obviously a team’s defending as a whole is responsible for the number of chances they give away, but these statistics do seem to confirm that Reina has definitely seen a downturn in his own personal form this season. Whether that’s entirely down to coaching is impossible to say, but it can’t be a complete coincidence that his relative loss of form has occurred after a significant change in the club’s management structure.

As with every aspect of a team’s success (or lack thereof), there are so many different factors to consider that not one thing can be pinpointed as the dominant cause. That said, Liverpool’s previously impressive defensive record has seen a definite downturn, which needs to be arrested sooner rather than later.

Back to the Top 4: How Much Investment Required?