Following on from his comparisons between last season and this, Andrew Beasley looks at the final 20 league games of Rafa Benítez and Roy Hodgson. A lot was made of the fact that Liverpool weren’t very good in 2010 before the change took place, so this piece examines that belief.

As we all know, Rafael Benitez was sacked as Liverpool manager having finished 7th in the league, which was deemed unacceptable.

The highest position Liverpool managed in the league at any point under Roy Hodgson was 8th, with an average placing of 12.35. He has now also been sacked, after 20 league games. 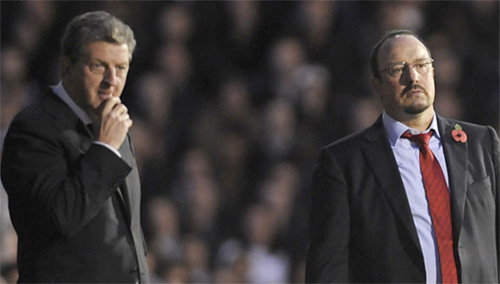 After writing articles earlier in the season comparing Roy’s early efforts against Rafa’s in 2009 (the same fixtures) and 2004 (so both were judged as the new manager), I thought it would be interesting to compare some statistics from their final 20 league games. Obviously in Roy’s case, these were his first (and only) 20 too.

Inevitably in a comparison of this nature, there are differences between the circumstances that the two managers faced which could be used to defend or attack them. For example, Benitez had bought all of the players (aside from the home grown lads) in his squad himself, whereas Hodgson had not.

On the other hand, the ownership issue was resolved during Roy’s tenure, so he should have had a ‘bounce’ from both that and his ‘fresh start’ status as the new manager; Rafa’s position was rapidly becoming untenable due to multiple issues within the club and his management influence had probably grown inevitably stale after nearly six seasons in charge. [Edit: Roy had a fit Torres for 19 games, while Rafa was able to play Torres in just nine of his 20 games; a big difference.]

Needless to say the fixtures weren’t identical, but both managers played ten home and ten away games, and some of the traditionally big fixtures (Manchester United away and Chelsea at home, as well as matches with Arsenal and Everton).

Understandably, there has been a lot of discussion here and elsewhere about the change in tactics between Rafa’s favoured 4-2-3-1 and Roy’s 4-4-2. More specifically, the shift in emphasis between pressing high up the pitch and defending deeper. But do the possession stats illustrate this at all?

Whichever way you look at it, Benitez’s team had more of the ball than Hodgson’s, and the difference in the two manager’s tactical approaches must surely be the primary reason for this.

In the twenty matches I looked at, Rafa’s Liverpool only had less of the possession in two games. As you’d probably guess, these were the games against Manchester United and Chelsea (a strange game with nothing really left to play for).

By comparison Roy’s team had less of the ball in nine of his twenty matches, and as you might assume, seven of these games were away from home. Ceding possession whilst down to ten men and leading for half a match against Arsenal might be viewed as acceptable, but to have significantly less of the ball against teams such as Wigan (42%-58%), and Stoke (a mind-boggling 36%-64%) is surely not.

Of course, possession alone does not win games. After all, Liverpool had more of the ball in the Merseyside derby this season, yet it made little difference as they lost tamely by two goals to nil. That said, by having more of the ball, it seems safe to assume that you’d be more likely to score and less likely to concede:

I must admit I was slightly surprised to see that the number of goals scored was fairly similar for the two managers, though clearly Rafa’s team was streets ahead defensively. Obviously these numbers have an impact on the figures regarding scoring and conceding first:

Whilst little of any major interest can be gleaned from these figures, it’s worth taking a closer look at the goals for and against by the same criteria (e.g. matches where they scored or conceded first):

Benitez’s team scored (on average) just over two goals a game when they scored first, which goes a long way to explaining why they won on ten of the thirteen occasions that this happened. Hodgson’s side conceded an average of over two goals whenever they conceded first, and this clearly contributed to the eight defeats from nine matches (the recent Bolton game stopped a complete whitewash of nine defeats on this front). A clear shift in defensive and offensive success had occurred, and if nothing else, this proves just how vital the first goal in the majority of matches is.

In view of this, who defended their leads the best, or clawed back any points from being behind?

Whilst Roy did recover four points from losing positions to Rafa’s zero, he did have eleven occasions (the nine where we conceded first, plus Sunderland at home and Tottenham away) to attempt and save the game to Rafa’s three, so it isn’t too much to be proud of.  For the record, Rafa’s team led in thirteen matches to Roy’s eleven.

It wouldn’t be an article of mine without taking a look at the substitution info:

There isn’t necessarily a better or worse time to make a substitution, but the real issue here is one of media consistency. Rafa made more changes and made them earlier on average, yet you never hear accusations of Roy ‘managing by numbers’ or suchlike. I had to smile when I saw that Rafa’s average time for his first tactical substitution across these twenty games was sixty-five minutes, the exact time that Andy Gray et al accuse him of working to. So please don’t tell anyone at Sky what I’ve found!

As I have mentioned previously in match threads on this site, if anything, Roy seems to be guiltier of being limited with the scope of his substitutions. For four games in a row this season (from Blackpool to Bolton) the first substitute brought on was David N’Gog every time, and for three games more recently (West Ham, Spurs and Aston Villa) the first sub was Fabio Aurelio on 73, 74 and 76 minutes respectively. These may be coincidences, but these little statistics suggest to me that Roy had little in the way of a Plan B, which is what many of us suspected all along.

The basic match facts illustrate the two men’s differences as simply as anything can, and are, after all, the ultimate barometers of football success:

Extrapolated over a whole season, Roy would have earned 47.5 points and Rafa 68.4. If you use last season’s final table as a guide, Hodgson’s team would have finished 11th (so slightly ahead of his average placing so far this season) and Benitez’s side would have been 5th.  The real point of interest here is that Fulham finished last season with 46 points and only one away win – sound familiar?

I have a multitude of other statistics I could throw at you, but they all basically illustrate the same point: even during arguably his worst period at the club, Rafa was a more effective manager at Liverpool than Roy, and I’m sure you don’t need me to tell you that. At the end of the season, I intend to do a similar comparison between Roy and Kenny’s halves of the campaign.

Blackpool (A): Match Preview and Discussion