So, Tom Hicks to put all his efforts into a mega lawsuit. An outrageously large and disgusting figure. (And the $1.6bn is excessive, too).

While we must be wary of embracing NESV with arms that are too open – once bitten, twice shy – it’s fair to say that their reputation in American sport is as stellar as Hicks’ is slime-ridden and sodden. These guys are Nirvana, Hicks is Billy Ray Cyrus; John W Henry is ‘Frasier’, George Gillet is ‘Joey’. A lot of good things come out of America – the folk are not all like Hicks and his mate, George W Bush.

John W Henry seems to be a man of class and distinction. The difference to three years ago is that I cannot find a bad word said about him, whereas few Texas Rangers fans had nice things to say about Hicks in 2007; something I wish I’d listened to more at the time (as well as Hicks’ disastrous dalliance with Brazilian football). Last year, Henry was voted the best owner in American sport; Hicks the 2nd-worst. So let’s hope the loose ends are tied up ASAP.

NESV worked wonders with the Boston Red Sox, ending an 80-year drought without baseball’s ultimate prize. Of course, not that English football is that simple; there isn’t the relative financial fairness that exists in that sport. These are not super benefactors, arriving with pots of gold. I, for one, am glad of that fact.

It’s not about buying success (see my new book for exactly how mega-bucks play an increasing role, and why Liverpool won’t be able to bounce straight back to where we were a few years back; the book was written, and a mountain of research undertaken, to show what’s required to succeed in the Premier League these days – and it’s very different to the ’90s).

I didn’t want the richest bidder to come in throwing cash around like Wayne Rooney in a brothel. It needs a considered approach, to make the most of the incredibly large and passionate fan-base, but without exploiting it. Of course, in terms of finances, the removal of the debt was the main priority, and that’s been taken care of.

It’s hard to see NESV finding the kind of money needed to break back into the top three, as the rich get richer. But no worries. Right now, it’s about building up again, bit by bit; undoing all the squad-thinning that’s taken place in the past two years. It’s about clever management, and making the right decisions, with the club at heart. For me, it was important that NESV won because they understand how to run a sports empire.

I have to say that I’ve been decidedly unimpressed by a lot of the football decisions made by Martin Broughton and Christian Purslow – two distinct rookies in the arena – but you have to give them full credit for the way they’ve played the game in their arena. After all, that was why they were originally brought to the club.

Frankly, the board – and the legal teams they’ve appointed – appear to have played a blinder. But of course, if a false move has been made along the way, it could yet prove hugely costly. The Dallas court has given permission to Hicks to file for compensation, so there are more twists and turns ahead; as you’d expect from someone as slippery as a lubed-up eel.

The key thing, though, was that Hicks and Gillett did not find a way to sell to who they wanted. Well done to all the main pressure groups and fans acting alone (or in unison) to make sure they didn’t get away with the true epic swindle. (And in that I include this site’s Erin, who was behind the successful viral distribution of her husband’s photograph of Hicks outside an investment bank.) It’s been outstanding to witness.

NESV now know that Liverpool fans are not to be messed with. We’re sick of being conned with broken promises and lies.

John W Henry even follows Spirit of Shankly and Save Liverpool on Twitter. Therefore, I see no reason why NESV would want to damage their reputation by doing just that. These are clever people, not out-and-out ruthless businessmen who only see in dollar signs. I refuse to believe that they will lie to us, or try to con us – because they know what happens as a result. And anyway, no amount of money is worth what it must feel like to be Tom Hicks.

It’s now vital that Liverpool FC gets its football strategy right; the priority was always to excise the parasites, and that appears successful. Getting out of the relegation zone would be a nice start; win at Goodison, and things really will start looking up. Now the heavy black cloud of the past couple of years has lifted, there’s the chance to translate some optimism onto the pitch. 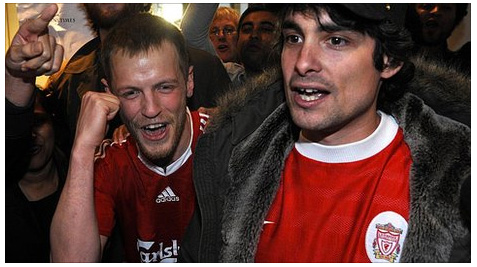