I knew my time was up on the official Liverpool site when they chose to run this Paul Hayward piece not in the Media section, but as an editorial. As much as I like the people who run the site – honest, intelligent people doing their job (as requested) – I was depressed at how such nonsense could be legitimised. It went against everything I’d spent so long arguing in favour of. By that stage I was finding it hard to recognise the club I’d happy to been associated with since 2005, but less comfortably since 2007.

“By the end of the Rafael Benítez reign one of the game’s great clubs had adopted a kind of mechanical pragmatism designed to destroy the opposition’s plans rather than impose their own.”

“Anfield’s regulars were suffering but were too loyal to complain. They filed out through the Shankly Gates bored. It was inimical to Liverpool’s followers to see their heroes win games by calculation alone. They revered Benítez for the 2005 Champions League win in Istanbul but could recognise the creeping joylessness of his football and his apparent inability to derive any pleasure from a goal.”

“Hodgson’s Liverpool will get back on the front foot. They will assert their pedigree. Nullifying the opposition will not be their religion. This is the first step out of the darkness for a side who finished seventh in the Premier League and now face a second Europa League campaign.”

Because, the day before, I’d written this piece pulling it apart. The Guardian is my favourite paper (I worked on the marketing side of things for the paper in the ’90s), and has some great football writers. But few writers get as much wrong about Liverpool as Paul Hayward.

Not only was the criticism of Benítez unnecessary to include on the official site, but the piece had no basis in reality. Hodgson and attacking football? – as well as he’d done in certain jobs, going on the front foot was never part of it. Go check the amount of goals his teams scored, and the many, many draws they would rack up (the story of his time at Inter Milan, too.)

Too many bored fans filing out through the Shankly Gates? – were we now forgetting the four Champions League quarter-finals in five seasons; three semis in four; two finals in three? Or the two best league seasons in terms of points won in 20 years? Last season was fairly grim, but Hayward’s piece was bunkum.

Liverpool averaged 1.7 points a game last season. So far this season, it’s 0.8. Progress? Is one win in eight really going on the front foot? A bit of research and Hayward might have seen the likelihood of this coming; I certainly did.

Take a look at this graphic from the Daily Mail, after Liverpool’s first seven games this season. Which manager’s stats suggests ‘mechanical pragmatism’?

Add the Everton game to that graphic, and it only gets worse.

It always baffled me that a major criticism of Liverpool under Benítez was a failure to break down teams at home. His side never won fewer than 12 league games at Anfield each season, and overall averaged 13 wins out of 19.

In total, only nine home games were lost under Rafa: 1.5 a season. In his middle four years, only three were lost in total.

Now I hear Danny Murphy (who’s not bitter) saying that the English heart was ripped out and replaced with a Spanish core – as if that’s a bad thing these days! Well, now the English are back. How’s it working out?

What was this English core that was torn out in 2004? And presumably, things were much better then?

Well, the Reds won an average of 10.8 games per season at Anfield under Houllier; more than two fewer each year than under his successor. In his final two seasons, Houllier’s team won just 9 and 10 respectively. (Compared to 12 and 13 in Benítez’s final two.)

Under Evans it was 12.5 wins per season at Anfield; better than Houllier, worse than Benítez (one of Evans’ seasons had 21 home games, not 19).

But it’s the losses that jump out: 11 in four seasons under Evans, 2.75 per season. With Houllier it jumps to 3.1 home defeats each year, more than twice as many as under Benítez.

Surprisingly, Liverpool actually won a good number of home league games under Souness (13 in each of his two full seasons), but lost 3.5 on average (3 and 4). And of course, these were 21-game seasons at Anfield, so again, it’s worse than Benítez’s record.

Indeed, the Spaniard’s win-rate at home was more-or-less identical to that of Kenny Dalglish when allowing for the extra games.

Liverpool’s record away from Anfield has been patchy ever since Dalglish left, with a pathetic three victories in each of Souness’ first two seasons (21 games). That was what caused the great collapse.

It’s perhaps to be expected to hear Mark Lawrenson say that the side Benítez left was worse than the Souness era, but as ever with Lawro, it doesn’t hold up to scrutiny. (Let’s also remember that Liverpool had the most expensive squad in the country under Souness. Last season, Liverpool’s squad didn’t even cost 50% of any of three of the squads of teams that finished above them.)

Since Souness’ days the record for away wins has dropped as low as five under each manager (most with 19 games played, not 21), including last year: Liverpool’s clear problem in 2009/10.

What does all this prove? Well, I’m not sure.

But one thing that seems apparent to me – as has done since his appointment – is that Roy Hodgson sets up in a very similar style to Gérard Houllier: the man with the worst home record in Liverpool’s recent history, and the only manager since the days before Bill Shankly to win less than ten home games in a season (2002/03; before that, it was 1954/55).

The point, you ask? Well, so far this season Liverpool have played four games at Anfield, three of which were home-bankers (and the other, Arsenal, was a home win more often than not under Benítez.) Now, even home-bankers turn into draws sometimes; but on the whole, you’ll win them most times.

The result from these four games? One win, two draws and a defeat. Early days, yes. But a 25% win ratio, even at this stage, is hugely concerning. Under Benítez, the average was 72% of home league matches won, rising as high as 83% one season, and dipping no lower than 67%.

With Liverpool’s away form so poor, and Hodgson having only won a couple of away league games in two-and-a-quarter seasons, home form is vital.

A lot was made of the tough start Liverpool had, and to a degree that was true; Arsenal, Man City and Man United were definite tough ones. But after eight games – four at home, four away – and having also faced West Brom, Sunderland, Birmingham and Blackpool, six points is a terrible return.

Four games may not be a statistically significant sample, but this article does show that abject home form was definitely not something Roy Hodgson inherited. Losing to a promoted side for the first time since the days of Houllier is also concerning.

In the terrible season that everyone labelled 2009/10 (and it was pretty grim), only Arsenal, Chelsea and Aston Villa – top sides – left Anfield with the full spoils.

This year, Blackpool have not only won, but won by dominating the Reds; unthinkable, even during the poor spells of the past six years. Sunderland, thrashed 3-0 last season (and it was a thrashing; even Steve Bruce said so), were unfortunate to only draw 2-2 this time.

Has that much changed in terms of the quality of the squad in a few months? And if it has – with three or four of the XI each week Roy’s own signings – should that still be blamed on Rafa?

One player Roy has lost is Mascherano; but “he’s not needed at home”, people said. But of course, his reading of the game, pace and tackling allowed the full-backs more freedom, and thus the pitch could be opened up. But even so, you’d still think his main benefit was against teams that needed stopping, not ones that were there to be beaten.

So Liverpool need more English pride, and must move away from calculating football? Sorry, but that stacks up as xenophobic bullshit, wrapped in bitterness. 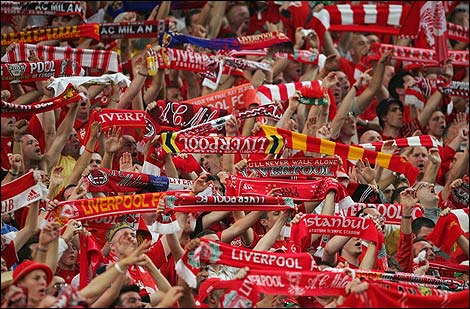