The SOS Extraordinary General Meeting took place in Liverpool city centre before the game with Sunderland.

The purpose of this article is to provide an abridged update on what I thought were the key aspects.

SOS-SL plan to post either the full meeting or edited highlights on the internet – not least because members are being asked to vote on all the proposals, notably the formal SOS-SL merger.

SOS-SL are following a two-pronged strategy:

The sit-in after the Sunderland match is the “toe in the water” to assess the appetite of ‘mainstream’ fans to join in.  If deemed to be successful it will lead to a gradual escalation and begin the campaign proper next weekend against Blackpool.  The rationale being that you can’t hope to get a match/stadium boycott if you remain a noisy minority group.  Conservative estimates for the sit-in seem to be 7,000, optimistic estimates 10,000.  That would equate to between 15 and 25% of Liverpool match goers on the day.   Definitely more than the “Independence Day” rally and previous marches so something to build on and another sign that the momentum is gathering.

Everything still has to be done through BarCap.  RBS have completely distanced themselves to avoid being open to accusations from Gillett & Hicks.  Talks have taken place but SOS-SL weren’t one of the “5 or 6” parties who expressed an interest in buying LFC as part of the formal sale process.  At some point, BarCap will want to know how much money SOS-SL have got behind them.

Other points of note

Note that there are still the same geographical constraints in place on the Credit Union.  However it is thought that it will be possible to use a Merseyside based middlemen/agency for people from outside Merseyside to invest.  I will provide an update on this when I get definitive information.

SOS-SL has 50,000 members/subscribers between them.  80% are based in UK and Ireland

Initially, SL got 10,000 subscribers at the original £5,000 per share.  New level is £500 per share and absolute commitment to 1 member 1 vote.  However still considering how to enable those who can and want to invest more to do so.

SL also have a network of high-profile expert advisors including specialist lawyers, football trusts, investment experts and mergers/acquisitions experts.  All of these are subject to absolute confidentiality.  SL assured us that have done a lot of work behind the scenes but there’s very little they can say about it in public.

SL have got all their ducks lined up for a share issue. They’ve got the finance in place (c£250k) and quotes from agents.  However they haven’t appointed an independent agent and will not be proceeding until any talks reach that stage.  When given the green light, there would be a lead time of 6 to 8 weeks minimum for the share issue, more like 8 to 10 weeks.

There are still legal niceties to be finalised for a share issue.  Hence, based on the pareto principle, a share issue will focus first on UK&I first followed by EU and then rest of the world.  There are known issues with Norway that is not a member of the EU.  Trying to overcome these directly with the SOS Norway branch.

TTT has a global membership/readership that reflects the Liverpool fanbase in general.  I’m sure nearly every member and reader would jump at the chance of buying a £500 share in Liverpool FC but there are still issues to overcome but they are being worked on constantly.  Again I will provide an update on this when I get definitive information.

[Further note from PT: beloved TTT Member Erin McCloskey was key to the recent internet intervention when Tom Hicks entered the Deutsche Bank, as reported here in the Wall Street Journal. This shows the great effects a little effort can produce.]

Other Notes and points of interest

Looking to be established: US west coast; US east coast; Ireland and  UK Midlands.  Under changes, minimum 25 members needed, max 250

• If you live or work in Merseyside, join the Credit Union scheme 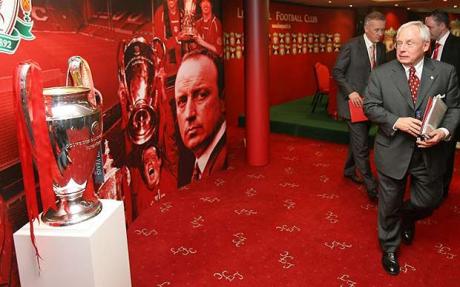 So, Whose Fault Is It?

"Pay As You Play" - Exclusive Chapter for Subscribers