It is the 17th October, 1987. Liverpool are playing Queens Park Rangers on a surprisingly warm autumn afternoon at Anfield. Kenny Dalglish’s side, well beaten to the title by local rivals Everton the previous year, have started well. They have dropped just two points from their opening eight league games, scoring 24 goals in the process. Their last three matches have each seen them score four times. They have already mustered two without reply against Jim Smith’s side, including a record-breaking strike for John Aldridge, and the Kop is purring.

But if Liverpool were frightening the world already by this point, things were about to get really scary. With eleven minutes to go, John Barnes collects the ball 25 yards from the Rangers goal. Surrounded by hooped shirts, who had stalked his every move all afternoon, he takes a touch before nudging a deft pass into Aldridge, who has peeled away to the left of the penalty area. Without hesitation, Aldridge returns the ball in to Barnes, who has powered clear of his markers and is able, without breaking stride, to side-foot a right footed shot high into David Seaman’s top left hand corner from 14 yards. Game over.

Yet if that was good, six minutes later came the pièce de résistance. 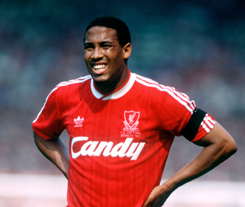