It might have been asking for too much for the Reds to break a second goalscoring Champions League record within a couple of years: the first, beating Besiktas 8-0, and the second would have been 22 consecutive scoring games. For a ‘boring, cautious, negative’ side, that would have made pundits’ heads explode.

It also brings the first blank of season. But away at a confident Italian side is never an easy assignment, and for once, when the chances came (all after the break), they weren’t despatched, and yet again, a great shout for a penalty was waved away at a point when the game could have been changed. It was an awful first half, but the second half was more like the Liverpool we’ve come to expect. 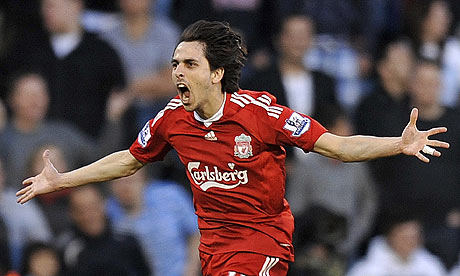 All the same, the month ends with 15 goals in six games across three competitions. So it would be churlish to complain.

The obvious difference between this season and last has been the sheer number of goals. The proliferation began in February, but the lack of cutting edge at times before that, and the missing of chances, dragged those figures back down to a more normal level – although, thanks to that crazy late spree, the Reds still finished top of the Premiership scoring charts.

This season that improvement is even more pronounced. (For full explanation of how the figures are calculated, see base of this post.)

The star of September, in terms of Goal Involvement, was a man who played a massive role in the springtime onslaught, although he started this campaign with a slow August.

Yossi Benayoun only made one contribution in the first month of the season, and that was a near-meaningless roll of the ball from a corner at the Reebok. Four league games, spread across 215 minutes, and virtually nothing.

Only three league games in September, plus Debrecen and Fiorentina in the Champions League, and he could count involvement in no fewer than eight goals, three of which he bagged himself. (I’ve included the game at Leeds in these figures, because it was a tougher assignment than most League Cup fixtures.)

Crucially, three of Yossi’s other involvements were final assists, and whatever part he played, it was never less than a meaningful touch in the build up.

From Boo Boys To Key Men

Of those who posted the best figures per-minute of playing time in September, the top two have both been targets of Kop derision, while another, Lucas, who had been roundly jeered at times, showed his worth with four ‘involvements’ to add to his improved strength and work-rate.

Andriy Voronin tops the chart for the season overall, and for September, in terms of contribution based on time spent on the pitch. But as that’s a small sample, it’s hard to assess too clearly. What it does tell us, though, is that he’s been an effective sub; even some of his critics are wising up to this fact.

Remember last season, when the Reds were struggling to break down Sunderland? Then Alonso came on and played that forceful pass directly forward, right into the feet of Torres? – the kind that other players couldn’t make? Well, Lucas played two of those on Saturday in the build up to goals. The first was cut out just as Kuyt got to the ball, but that, and the pass for the 5th goal, were the kind that his predecessor was capable of. He’s not that good, of course, and may never be, but he’s a lot better than he’s given credit for in some quarters. (The Stoke manager, Tony Pulis, said Lucas was the best player on the pitch when they came to Anfield; few of Lucas’ critics would dare admit as much.)

Many fans, myself included, feel that Gerrard, by contrast, did not have a good September (by his high standards), and that is backed up by the figures. One great goal, albeit possibly an over-hit cross, and two world-class assists (which I valued at 4 and 5 out of 5 respectively) show that he still contributed.

But six Liverpool players were involved in a greater number of goals, and Babel, with just 148 minutes of football, achieved pretty much the same end product (also including one flukey goal against Hull). I never thought I’d be saying that a few weeks ago.

Based on last season’s figures, which were calculated for Red Race, the following players are contributing far more per-minute than in 2008/09:

The following players are contributing more, but not markedly so:

The following players are contributing less (out of those who have played this season):

Note: There may be reasons for all of these changes, many of which are beyond simple explanation. The figures are merely an indicator, not factual proof. They may back up arguments, but they don’t conclusively decide them.

This piece has been made available as free for anyone to view. Future Goal Involvement installations will be for members only.

When turning football into numbers, there will always be problems. And when it comes to ‘assists’, this is especially true. How can you reward someone who rolls the ball eight inches from an indirect free-kick as highly as someone who beats seven men and puts the ball in the striker’s path in the six-yard box?

Goal Involvement, devised for this book [and applicable to only Premiership and Champions League games], is a subjective system, which tries to move away from the hard binary of assist figures by taking into account the quality of the contribution in the build-up to a goal, not just rewarding the player who made the final ‘pass’. So not only are the number of goals a player is involved in counted, there is a separate tally for the quality of his contribution.

Perhaps the same can be done with goals, but even the simplest tap-in requires the act of getting into the right space at the right time. As the aim of the game is to get the ball beyond that white line then that’s perhaps taking things too far. Goals are goals (although the next chapter does look at the importance of when goals are scored within a match, and the quality of opposition scored against; let’s face it, a goal against Manchester United is rarely worth the same as one against a mid-table side. So in that sense, their value does differ.)

But goalscorers are already richly rewarded in terms of kudos; their achievements are well-known, whereas those who create the chances often get less acclaim for their actions –– particularly those who aren’t flashy in what they do. Many significant contributions don’t even get listed as assists.

Standard assists work back no further than the penultimate player to touch the ball. But goals are created far before that point. However, a sensible cut-off is required; if a defender performs a miracle in his own box 37 passes before a goal is scored at the other end, he has clearly played a role in that goal –– but too much has happened in between to be able to class his participation as an assist. A line must be drawn somewhere. If he plays a 60-yard pass that within two or three touches has led to a goal, then that will be considered.

Dummies, clever blocking of an opponent off the ball, winning possession, running to create space, even a good pass that nicks off an opponent before rebounding to a team-mate: contrary to standard assists, all of these are considered as part of Goal Involvement, providing the contribution is of some importance. It may not get a high score in terms of the quality of contribution, but it will go down as another goal in which that player was involved.

Of course, creative players only get their reward if the striker does his job properly. A winger could put in ten brilliant crosses and the striker miss them all, only for someone else to put in an average cross from which he scores. So –– as with all statistics –– this measure needs to betaken in context, and its shortcomings appreciated. Emiliano Insúa didn’t feature in a single Liverpool goal, but his fine attacking play from left-back was clear to see.

To judge the quality of involvement, I developed the following guide:

1 = The most basic touch, such as an inadvertent ricochet or rolling the ball from an indirect free-kick.

2 = More involved than 1, but basic all the same. Could be simply keeping a move ticking over, without making the final pass.

3 = Significant involvement, but fairly standard. Nothing remarkable, but some skill, fine technique or vision required.

4 = The same as 3, but where something special marks the touch out. Might be more than one involvement in the move, or the use of the player’s weaker foot to surprising effect. Could be a good pass with the same player having already won the ball, or a good pass that is elevated by inch-perfect weighting.

5 = World-class, genius, inspired. Often means more than one involvement, or a moment of unexpected vision. Basically, a magnificent contribution to a goal being scored. (Example: Daniel Agger’s dribble upfield for the equaliser against Wigan at Anfield, where he then played a one-two, beat a man, and delivered a ‘wrong’-foot pass to Kuyt that was inch-perfect for him to score.)