Some time in the late eighties, the BBC issued a documentary called The Official History of Liverpool FC.  With a football-illiterate father and no one to talk to about my growing obsession with the game, that video was played on a semi-permanent loop to the extent that eventually I learnt it all by hear. And, I have to admit, that I thought that I knew quite a lot about the club thanks to that video.

Eventually, I realised that I had only scratched the surface and my education was boosted by reading whatever biographies I could come across. Even so, with a history as rich as Liverpool’s it is virtually impossible to cover everything going bit by bit. Which is why the Liverpool Encyclopedia is such a great idea: it serves as the bible of all things Liverpool.

One of the men behind this labour of love is Arnie Baldursson and the Tomkins Times got in touch to talk about this book and what led to it.

How did the idea of a Liverpool Encyclopedia come about?

DeCoubertinbooks published “Liverpool: The Complete Record” to great acclaim in 2011. As far as we knew that could have been the only book we would ever write, but the following year our publisher suggested that a Liverpool Encyclopaedia would be an ideal next step for us. Whereas “Liverpool: The Complete Record” focused on stats and a comprehensive narrative for each season and was in black and white with few pictures, “The Liverpool Encyclopedia” ideally complements that with profiles for every single player and key aspects of the club’s illustrious history as well as including around 1,100 images and is all-colour.

Who made the decision as to what to include and what to leave out?  How were such decisions made?

The main issue was that we discovered in the designing process that we had too much text, which is a better problem to deal with than being forced to write more text to fill the 656 pages. So, I (Arnie), the editor of LFChistory.net, who wrote the majority of the book, made the necessary cuts so the material would fit the number of pages issued to us without having a detrimental effect on the book.

A lot of research must have gone into such a book.  How long did you spend writing it and how was the research carried out?

The book has a solid foundation in the vast material that we started collecting 11 years ago when we launched LFChistory.net. But, still a Herculean effort is needed up to nine months prior to publication as more detailed research is necessary for a work of this magnitude and also the information at hand needs to be categorised and moulded into a fluid text. We commenced work on the latest one, “The Liverpool Encyclopedia”, in October 2012 and finished in August 2013.

Did you uncover any stories you weren’t aware of?

During the research phase we discovered through some clever detective work what amounts to be Alex Raisbeck‘s mini-biography in several issues of a Scottish newspaper published in 1915. It sheds new light on the life and times of Liverpool Football Club in the first decade of the 20th century and its protagonists. Before this discovery we didn‘t even have a single quote from Raisbeck, who was Liverpool‘s first superstar, the Steven Gerrard of his time, if you will. As well as using these series of articles in Raisbeck‘s profile, they also came in handy in entries all throughout the book that relate to Liverpool‘s early history from 1900 to 1910. This is a big revelation, one which we are very proud of.

Which was the hardest part of the whole book to write? And which did you take most pleasure in writing?

Hillsborough was without a doubt the most sensitive subject and quite chilling to have to summarise such a harrowing sequence of events that led to the disaster costing 96 lives and ruining countless others. More than anything else I enjoy discovering new information about the club and adding those bits to the relevant entry, such as that George Patterson was, in fact, the first man to be appointed manager of Liverpool twice, not Kenny Dalglish, as previously thought.

As you mentioned you are the people behind LFChistory.net. Did you think that would be as successful as it has been?

Gudmundur Magnusson and myself started working together on the board of the Official Icelandic Liverpool Supporters’ Club back in 1997. In 2003 our passion for Liverpool manifested itself in the launch of LFChistory.net as we felt that a clearer vision of Liverpool FC’s history was necessary on the Internet. Soon enough it dawned on us why such an attempt hadn’t been made as it was an enormous task putting detailed information about every single Liverpool game into a database. The site has grown considerably in volume and importance and has been officially embraced by the club as well as its huge fan base. We never really envisaged that our little project would be such a celebrated site. In the beginning you hope that someone will take interest in your efforts, but this has really been an incredible journey.

Do you think that Liverpool fans live too much in the past?

You are shaped by what has happened before. It is not unnatural to remember with particular fondness that time of your life when you felt happiest, a sense of nostalgia. Sure, Liverpool had more success in the latter part of the 20th century when the Reds were favourites for the title and the Kop was more vocal, but it still doesn‘t mean you can‘t enjoy the present and the current state of the club which is pretty healthy. A friend of mine and a Red for over 60 years, John Martin, reminded me once that he was following Liverpool when the club was in Second Division so the current situation is not that bad.

Yes, we have multiple projects that need our attention, but we do have to focus on our day jobs and families so we have to make time to develop what is coming next. Right now an iPhone app of the site is being created as our Android app has been downloaded by more than 50,000 users. We also plan to launch another website that we believe will be very popular due to its uniqueness.

Finally, why should people buy the Liverpool Encyclopedia?

We have learned in the last few years that the more sense you get of the club as a whole the more you will appreciate it and what it stands for. We have interviewed a number of Liverpool legends who have given us a unique perspective on their glorious careers. The players of yesteryear are truly as interesting as the current ones and we have managed successfully to infuse humanity into even the most unknown of figures. We offer new information about our various subjects, not simply repeating what has gone before as that doesn’t serve any purpose other than to rip off readers. We have truly put our heart and soul into this labour of love that is reflected through the writing and offers great value for money. I am confident that we have put all our knowledge of the club into the “Liverpool Encyclopedia”. 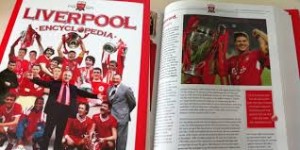