Six of the last nine Premier League games between Liverpool and Arsenal have ended as draws.

There have been six 90th minute or later goals scored in the last six league matches between Liverpool and Arsenal.

There have been three own goals and two penalties scored in the last five league meetings between the Reds and the Gunners.

There have been three red cards in the last three Premier League games between Arsenal and Liverpool.

If Arsenal avoided defeat, it would be the first time they have gone five consecutive league games without a loss away at Anfield.

Liverpool’s victory at the Emirates back in August ended a run of eight Premier League games without a win for Liverpool against Arsenal.

This is Liverpool’s joint-worst tally of points after 12 home matches of a season in the Premier League era (20).

The Reds are one of two teams who haven’t lost a home league game this season, but they have drawn eight and won only four of their 12 matches at Anfield.

The Reds have the worst chance conversion rate of any team in the Premier League, scoring with just 8.6% of shots. 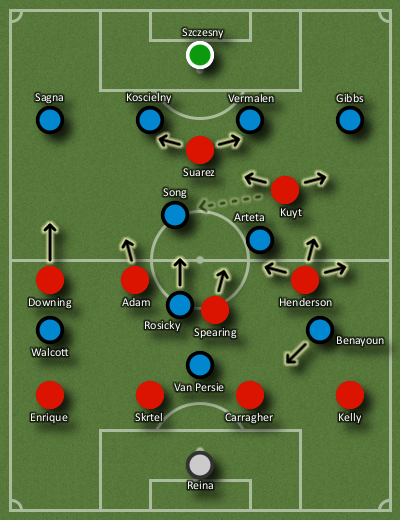 Before the match, both teams had doubts over key players. For Liverpool the question marks were over whether Gerrard and Johnson would pass late fitness tests. Agger was also sidelined due to the rib injury sustained in the Carling Cup final. For Arsenal, Wenger was incensed that Vermaelen and Van Persie had been over used in their nations’ midweek friendlies. In the final event, Liverpool were without their two players while Arsenal started theirs. Rosicky, another uncertainty before the game, was also fit enough to start.

Both sides went with the expected formations. I argued before the game that Arsenal would probably line up with their trademark 4-2-3-1; the only tactical dilemma (other than the injury concerns) was whether Wenger would go for a possession-orientated variant (with Benayoun tucked inside on the left to help hold onto the ball in the middle) or the direct attacking variant (with Gervinho working the channels and the area behind Liverpool’s right back). Wenger plumped for the possession variant.

For Liverpool the main question was who to play on the left wing. Dalglish preferred to use Bellamy as an potential impact sub, mainly due to his efforts in the Carling Cup final and the 75 minutes he played midweek for Wales. It was logical to start Downing on the wing. The alternative was Maxi Rodriguez, but he is only just coming back from injury and has not had enough match time to be started in such a big game. In the minutes he has played, he has not looked on his best form, either.

Both teams played asymmetric formations which caused congestion in the middle of the field but led to an interesting tactical battle. What made it even more intriguing was that Liverpool were playing a very fluid style, which is unlike previous matches.

Free Friday: WWWW.... And Now You're Gonna Believe Us