Who Are Liverpool’s Top Creative Pairing? The Data Viz Knows

Who Are Liverpool’s Top Creative Pairing? The Data Viz Knows

When an article relies upon statistics, it can very quickly become out of date. More games are played, more goals are scored. The numbers move ever forward.

Unfortunately for all of us, the only moving numbers at the moment seem to relate to COVID 19. But with no football for the foreseeable future, we can at least take a look at the facts and figures which have brought Liverpool to the brink of their first league title for 30 years.

Since our last round up, in the first week of January, Liverpool have moved ever close to becoming champions of England, while exiting Europe prior to the final for the first time under Jürgen Klopp. We start, as ever, with a look at whether they got what they deserved. Let’s begin the begin.

People often ask if I can shade the chart to show where the boundaries for expected wins, draws and losses lie. And sadly, I still can’t. But I can certainly hamfistedly add lines using Microsoft Paint with the best of them. 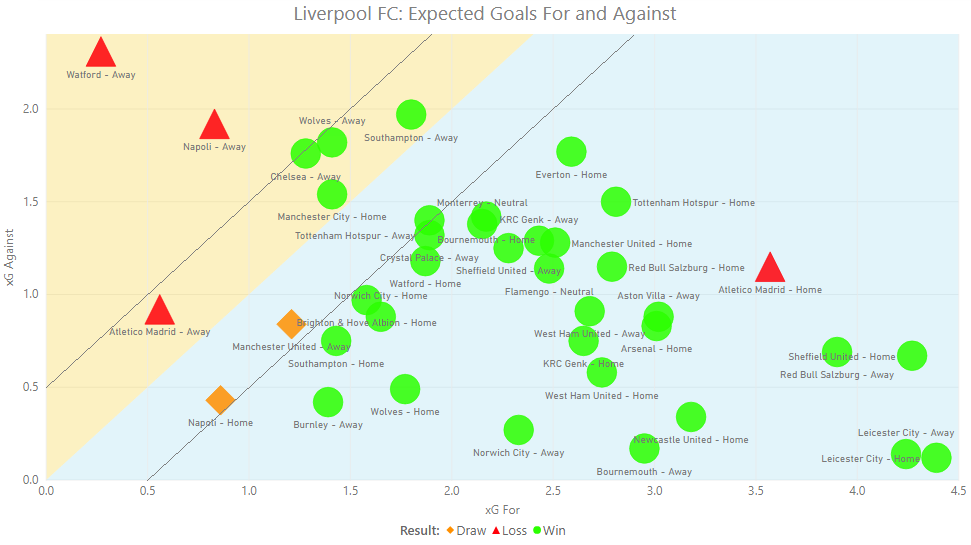 It hadn’t occurred to me until compiling this graph, but Liverpool haven’t drawn a match in a major competition for almost four months (sorry, Shrewsbury), and only twice in total this season. However, they certainly should’ve had a few draws in the period since our previous data viz round up.