February 1, 2018 In By Andrew Beasley, Statistical Analysis, Subscribers Only

All data taken from understat.com. Statistics are for the Premier League only, and are correct up to and including match week 24.

The previous article in this series looked at Liverpool’s underlying performance in each 15 minute segment of a match. There has been much debate about whether the Reds have scored enough late goals, so that seemed a good way to see how they have been getting on.

But one thing that didn’t cover was the game state at the time. In other words, whether Liverpool were winning, drawing or losing, so that will be the focus of this study. As this was written on the day after the Reds spent 50 minutes failing to get back on terms at Swansea, it seems as good a time as any to investigate Understat’s expected goals (‘xG’) by game state numbers.

Where cross-season comparison was easy last time, we have to acknowledge Liverpool have spent different amounts of time in each game state each year, so all of the stats quoted will be per 90 minutes played. Here is a chart showing what proportion of time the Reds have been in each game state for the past four seasons. 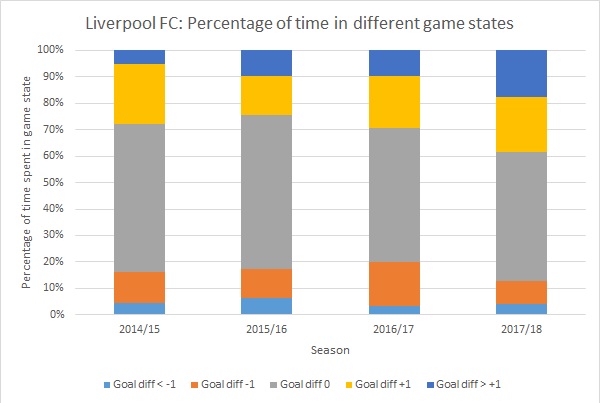