Liverpool FC: The Most Consistent Team in Europe?

Liverpool FC: The Most Consistent Team in Europe?

November 23, 2017 In By Andrew Beasley, Free, Statistical Analysis, Subscribers Only

Data correct up to games played on 19th November 2017.

After the fourth round of matches in this season’s Champions League group stage, I compiled the expected goal (‘xG’) data for the tournament from FiveThirtyEight. Doing so revealed Liverpool had the best xG difference of all 32 teams. 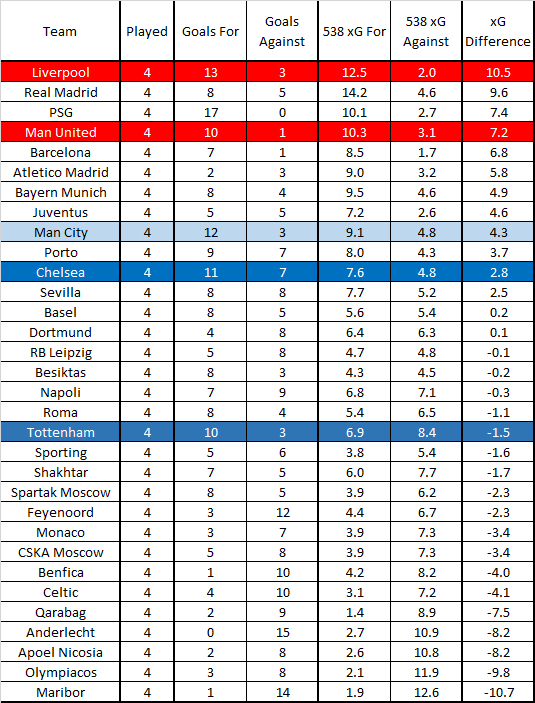 Of course, this wasn’t actually that surprising considering half of the Reds’ matches had been against the weakest team in the group stages. It did make me wonder how Liverpool have been performing each week when compared to the European elite though.

I wrote about that last season with a focus on Germany and Spain. As FiveThirtyEight carry expected goal data on a multitude of leagues, France and Italy will now be included too. Despite the Reds’ stuttering league form this season, their underlying performance is very encouraging indeed.

The only place to start is with a look at the top ten teams for expected goals difference. The clubs are colour coded by their country, and the final column shows actual performance against expected, with particularly strong under-or-over performance highlighted. 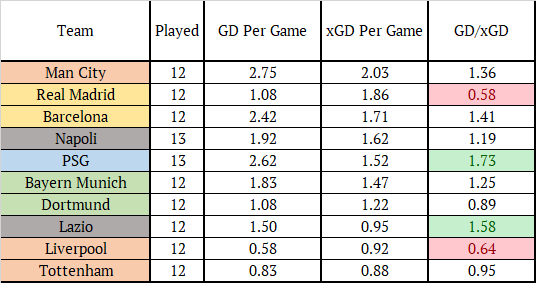 Manchester City are leading the way across Europe, and not just England. It’s interesting to see Real Madrid so high in the table when they have failed to win five of their 12 league games so far. Perhaps any talk of their demise is a little premature?