How Do Liverpool Compare To The Best Teams In Europe?

How Do Liverpool Compare To The Best Teams In Europe?

Certain websites often refer to Europe’s big five leagues, yet in reality there are only three who could seriously claim to be top of the tree. Serie A is a long way from being the dominating force that it was in the 1990s, and Ligue 1 doesn’t have that many top players, so in reality we look to the Premier League, La Liga and Bundesliga for the best teams and the highest quality football. A look at the combined current rankings of each country’s teams in the Euro Club Index table emphasises the point.

France may have as many teams as Germany in the ECI top twenty at the time of writing, but after PSG and Monaco there’s a massive drop off. It’s a similar story in a way for England, whose big six are all in the top twenty (with Liverpool currently ranked nineteenth) yet they are only markedly ahead of France when it comes to teams in the top one hundred.

The big guns of English football are a fair way ahead of most of the rest of their division, but how do they all compare when we look at the league stats for this season across England, Spain and Germany? For starters, here’s a look at the top ten teams for total shots ratio, with the teams colour coded dependent upon which country they play in. 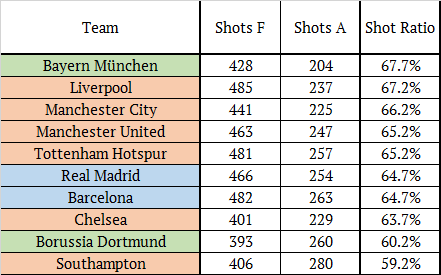 Liverpool don’t just lead the way from the rest of the Premier League, but also thirty-seven of the thirty-eight top flight teams in Germany and Spain too, and there’s no shame being behind a side who are so dominant in their country that they will shortly wrap up their fifth league title in a row.

The Reds have the best total shots ratio on the road of any of the sides in the three leagues, though matches like Burnley and Hull (where they conceded from rare opposition attacks and took plenty of poor quality shots trying to get back into the game) will have had an impact there.

I’ve previously written on this site about how Jürgen Klopp’s Dortmund side were exceptionally well balanced when it came to shots on target, so let’s see how Liverpool fare for shots on target ratio in his first full season at the club. 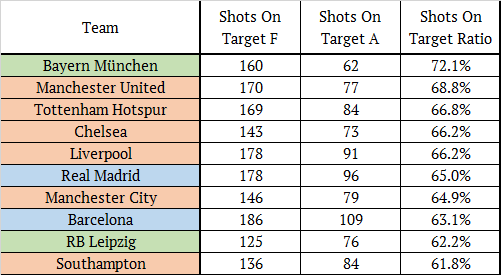 It’s fairly similar to the total shots table, though it does perhaps give a clue as to why Leipzig have been Bayern’s main title rivals this season and not Dortmund. To emphasise the quality of the teams tussling it out at the top of the Premier League, it’s important to remember that prior to Leicester City breaking all previous stats regarding title winning performance, the champions in England averaged 66% for shots on target ratio, and as we can see there are currently four English teams averaging that or better this season.

The figures in these two tables certainly suggest that Liverpool could in theory do very well in Spain, and the fact that they are a small, light team (which Paul Tomkins investigated to brilliant effect here) wouldn’t matter as much as it does in the up-and-under heartland of England. However, when we try to factor in an element of shot quality, by looking at the figures for clear-cut chances, we can see that the Reds are a long way short of the big two in Spain. 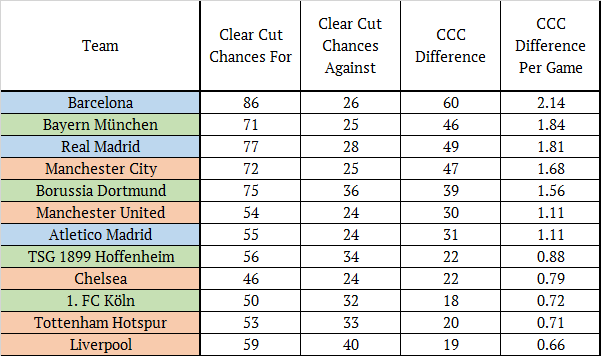 Unlike with their total shot ratio, it is Liverpool’s performance on the road that hurts them here. Barcelona have had twenty-six more clear-cut chances than their opponents when they’ve been away from Camp Nou, yet for Liverpool it has been an even split of twenty-seven both for and against away from home.

The Reds’ mid table ranking for total CCCs conceded (they are currently 27th out of the fifty-eight teams in these three leagues) combined with their otherwise excellent shots against stats means that they have the worst record for proportion of shots against in their box which are classified as clear-cut chances. When you look at the league positions of the other poor performers, you can see that (Leipzig aside) it’s not company that you would want your team to be keeping. 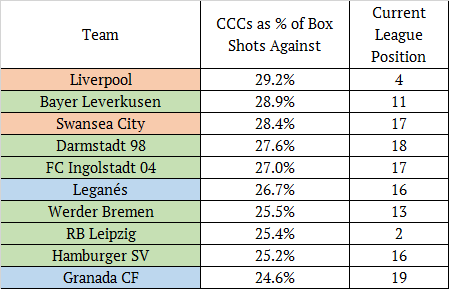 Expected goals (a.k.a. ‘xG’) is probably the fairest way to assess teams though, as it assigns a value to each shot based on the historic likelihood of it being scored. I recently developed a simple system based on the past five full seasons of Premier League data, and here are the four shot types and their values:

It’s far from the most accurate system out there, but it’s easy to compile the data and then compare teams across countries and/or past seasons. Here’s the combined table for England, Germany and Spain this season, sorted by xG difference per game:

By chance, the top ten are also the only sides who have been over half an expected goal better than their opponents on average per game this season. Looking at Liverpool specifically, their xG difference per game is an improvement on the last two seasons; they posted 0.27 in 2014/15, and 0.45 in 2015/16, so they are moving in the right direction even if they are a fair way short of the European elite as the table here shows, though there are more opponents for the best teams in Germany and Spain to dominate so their higher xG differences are to be expected.

It’s also clear that Liverpool’s relative success when compared to the rest of the best three European leagues this season has been built on shot volume (where they rank sixth for shots for and third for shots against) as opposed to average quality per shot (twenty-eighth for shots for, and a disastrous fifty-fifth out of fifty-eight for shots conceded). The Reds have been one of Europe’s better sides overall this season, but there’s still plenty of room for improvement.