From Excess To Success: Neymar, Inflation, and the Price of an EPL Title

From Excess To Success: Neymar, Inflation, and the Price of an EPL Title

Like stock markets in the late nineties, the English transfer market is soaring ever higher. In 2010, EPL clubs spent nearly £500m; in 2014 they broke the £1bn mark and this season total spending should exceed £1.5bn. While the number of transfers each season has risen gradually since 1992, the huge increase in spending has been driven by exponential inflation in transfer fees. In 1993/94, £3.75m was enough to buy one of the best midfielders in the league: Roy Keane. These days, it’s difficult to imagine that sum buying you anything but a budget squad player. A top-class midfielder now costs upwards of £50m, and could easily be significantly more.

Such rapid inflation renders meaningless comparisons of club spending over a long time horizon. £7m is peanuts by today’s standards but was the maximum spent in 1992, in this case by a Jack Walker-funded Blackburn (of which about half went on Alan Shearer). If we want to measure and compare player investment over time we must convert past transfer fees to their current market value. How much is the £3.6m that Blackburn spent on Shearer in today’s prices? The signing of the summer saw PSG apparently shatter the transfer record by spending almost £200m on Neymar. But was this actually a record fee once we account for inflation?

In this blog, I’ll investigate how transfer spending in the EPL has varied over the last two decades. Season-by-season, I’ll look at how much each major club has invested in players (net of sales). How much does it take to buy success?

To compare spending over long periods of time we must understand how transfer fees vary from one year to another, that is, we must measure transfer price inflation. Fortunately, this has already been done.

Graeme Riley and Paul Tomkins (of the excellent Tomkins Times) have built a database that contains every transfer to or from an EPL team since 1992. By carefully researching each transfer fee they were able to calculate a value for the ‘average’ transfer each season, and therefore construct an index of transfer inflation for the last 25 years. They named it the Transfer Price Index (TPI). The exact details of how TPI is calculated can be found here. Note that TPI has not yet been updated for the 2017/18 season: henceforth ‘current market prices’ will refer to prices at the end of the 2016/17 season. 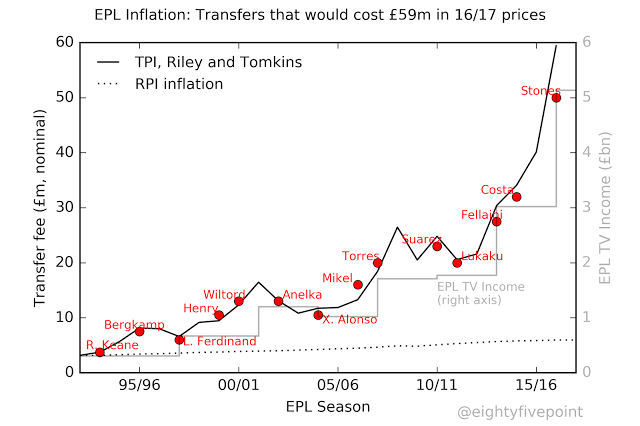 Figure 1: Inflation in English transfer fees — the Transfer Price Index (TPI, black line) — as measured by Graeme Riley and Paul Tomkins. The grey line/right axis shows the income the EPL raised through the sale of broadcasting rights over successive deals. Red dots show selected transfers at their original cash value: all would be valued around £59m in today’s market.

We can apply the TPI to calculate the present market value of any English transfer dating back to 1992. To demonstrate the point, I’ve plotted various transfers from the past 25 years and their cash value at the time of the transfer in Figure 1[1]. It may appear to be an unusual selection of players but they have one thing in common: according to the TPI their transfer fee in the current market would be around £59m[2]. In answer the question posed above: the £3.6m Blackburn spent on Alan Shearer in 1992 is equivalent to £68m in today’s market.

What causes transfer fees to increase so rapidly? TV money has a lot to do with it. The grey line in Figure 1 indicates the amounts paid by broadcasters to purchase the rights to televise EPL matches over successive deals. In 1992, Sky paid £304m to purchase the rights (see the right-hand axis in the Figure); the most recent deal, which started last year, was worth £5.14bn. That’s a factor of 17 increase, close to the inflation seen in transfer fees over the same period.

The Price of Success

If TV money is the principal driver of transfer inflation then how much effect have Oligarch owners had? Success can be bought, as Man City and Chelsea have demonstrated. The billions invested in both clubs has enabled them to hoover up many of the top players around the world. While some of these signings have not worked out, the net is cast sufficiently wide that title-challenging squads are built eventually. Indeed, it has been suggested that only 40% of transfers are a success; this may seem low, but it’s certainly a rate that the big clubs can live with.

In a recent paper, Financial Doping in the English Premier League, Iorwerth, Tomkins and Riley propose several new metrics for assessing the overall cost of a premier league squad and the average costs of each club’s starting XI over the course of a season. They demonstrate that, aside from Leicester’s victory in 2015/16, no club has won the EPL since 2003/04 with a total squad value of less than around £400m (in today’s prices), or an average starting XI less than £210m. They also show that the gap in team value between the top four and the EPL average has grown from tens to hundreds of millions of pounds (after correcting for transfer inflation).

Figure 2 shows the total cumulative net investment (transfer spending minus receipts) of seven EPL clubs since the 2000/01 season, inflated to present market values[3]. Each line tracks the total amount a club spent on players, net of sales, since the start of the millennium. 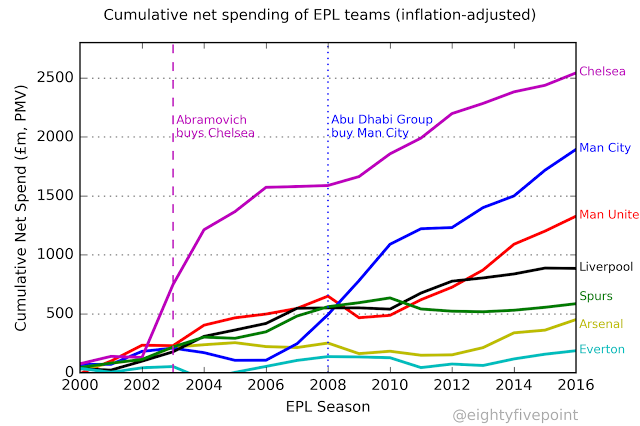 Since Abramovich bought the club, Chelsea have invested nearly £2.5bn in players (again: in current prices and net of sales). In his first year, Chelsea spent £617m in today’s prices (£113m at the time) and finished 2nd, behind Arsenal. In his second year they spent £465m (£92m) and won the title. So it cost Chelsea more than £1bn to buy the title. They finished as Champions in the following two seasons, spending over £300m in today’s prices to do so. Since 2003/04 Chelsea have won a total of five titles: that’s about £480m per title in the current market.

Similarly, it cost the Abu Dhabi Group £1bn to buy their first title for Man City, four years after they bought the club. They have spent a further £650m since, yielding one further title. So that’s around £825m per title. Over the same time period (since 2008), Man United have won three titles at a cost of about £260m per title in today’s prices. If we go back to 2000/01, this decreases to about £190m per title. Of course, in 2000/01 United already had the best team and one of football’s greatest managers.

In the decade that followed their unbeaten, title-winning season, Arsenal’s cumulative net spending declined as sales consistently exceeded spending. Despite the recent uptick, the long period of under-investment clearly hindered their prospects of reclaiming the title and it’s possible that the damage is still being felt today. While Man City may have overpaid for their two titles, Arsenal have simply not spent enough to mount sustained title challenges year after year.

Are Spurs the counter-example? Over the last seven seasons they have been relatively parsimonious, with transfer revenue matching expenditure. On the other hand, they have not actually won anything, nor really come close.

The £113m (non-inflated) that Chelsea spent in 2003/04 was a completely unprecedented amount at the time, greatly exceeding what any other club had ever spent previously. However, in today’s market, it’s no longer a surprising amount. It’s only when you calculate that £113m in 2003 is equivalent to spending £617m today that you realize how much Chelsea rocked the EPL boat. To correctly compare transfer fees and club spending over an extended period of time it is necessary to convert transfer fees to a consistent basis. Graeme Riley and Paul Tomkins’ TPI index provides the necessary tool to do this.

At the beginning I asked if Neymar is still the world’s most expensive footballer once we account for inflation? The answer is no. It cost Real Madrid £80m to sign Cristiano Ronaldo from Man United in 2009; that is equivalent to £232m in today’s prices. On a comparable basis, Ronaldo was more expensive[4,5].

Thanks to Paul Tomkins for providing me with the latest Transfer Price Index and transfer data, and to David Shaw, Paul Tomkins and Omar Chaudhuri for comments.

[1] NB: I am not suggesting that the players plotted were of similar ability; I’ve simply picked transfers that have a present market value of £59m according to TPI.

[2] To be precise, by ‘current market’ I mean prices at the end of the 2016/17 season, before the summer transfer window opened. TPI has not yet been updated for 2017/18 season transfers.

[4] If you’re willing to apply TPI (which is measured using English transfers) to transfers between foreign clubs, then Ronaldo is not the most expensive signing ever. That honour belongs to Gianluigi Lentini, who was signed by A.C. Milan from Torino for £13m in 1992. That’s £244m in today’s prices!

[5] Based on the continuation of recent trends, I would expect the next record transfer (in non-inflated terms) to occur in a couple of season’s time, cost about £250m and be a player who is currently about 22/23 years old.