The Stats That Help to Win Matches

The Stats That Help to Win Matches

This article will refer to my expected goals system (the full explanation of which can be found here). The data is correct up to 28th February 2017.

For my column this month I thought I’d take a look at which stats correlate with winning football matches, if there are any trends or changes from last season to this in the Premier League, and how Liverpool fare compared to the various averages. This isn’t a brand new idea, but it’s good to check in from time to time. In the figures below, we’re only looking at games where one side won, so draws are excluded, and I’m quoting how many times the team that topped that stat also won the match. We’ll begin with a look at one of former Reds’ boss Brendan Rodgers’ favourites: Possession.

Last season, as possession-averse Leicester City stormed to the title, having more possession than your opponent provided essentially coin flip odds with regards to whether you won or not. As the traditionally stronger teams have re-asserted their dominance in 2016/17 there have been a higher proportion of wins to the team that has more of the ball, though as we’ll see shortly, it’s still less relevant than various shot metrics.

What of Liverpool this season? Well, here are the eight matches this season where a side has had at least seventy percent possession yet lost the match: 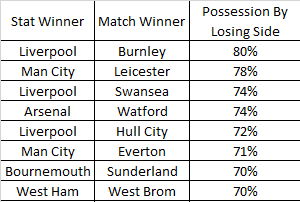 The Reds have logged the most possession by a team losing both at home and away this season, and are the only side to feature three times on the table (my previous article covered Liverpool’s issues on the road with lots of the ball in more depth). Manchester City play a broadly similar style to Liverpool though, and have clearly had some similar issues at times this season.

This one surprised me a little, as I would’ve assumed that having more touches in the opposition penalty box than your opponent would lead to a win in the vast majority of cases, but it has not this season. Here are the eight upsets from this season where a team had at least thirty penalty box touches more than the team that beat them. You may recognise a few of these: 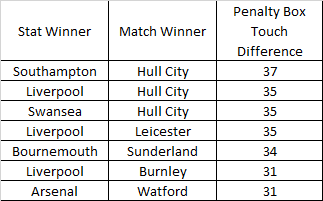 Sadly for us we can see the Reds feature heavily again, and also that Hull City have been the grandmasters of smash and grab wins in terms of this metric this season. This hasn’t all gone against Liverpool though, as they won at Stamford Bridge despite a penalty box touch difference of -19, which is the eighth largest by an away winner this season.

There has been a remarkable level of consistency across the last two seasons with this one, though it’s interesting to note that in La Liga this season 72.2% of won matches have seen the team with more big chances win the day; maybe finishing is better there? Here’s a table of matches where the winner has had at least two clear-cut chances fewer than the victor, and for once Liverpool are on the winner’s side of the table.