John Achterberg is a Witch! Burn Him! (And Burn Karius Too)

John Achterberg is a Witch! Burn Him! (And Burn Karius Too)

Ever since Joe Corrigan was blamed for the ills of David James and others two decades ago I’ve considered the assessment of goalkeeping coaches as rife for conspiracy theories. We don’t know the facts, as the work takes place behind the scenes, so it’s easy to put a spin on things.

Unlike outfield players, there’s only one ‘coached’ goalkeeper in the team. So however that goalkeeper performs it’s easy to then blame the coach when it goes wrong; whereas outfield players’ form comes and goes. If an outfield player has a few bad games – if a striker misses a few chances – the assessment usually goes beyond it being just the coach’s fault.

And assessing a goalkeeping coach is impossible unless you regularly view training, or talk to those keeper who work under him. Jürgen Klopp has spoken incredibly highly of John Achterberg’s work ethic, and the Dutchman gained his UEFA Pro Licence this summer. That suggests he’s no incompetent fool.

Loris Karius was bought to be no.1, and then broke his hand; which made his introduction a little trickier, as he was coming in cold. Also, Simon Mignolet had been having a pretty good season. But Klopp has every right to stick with Karius, and back his man; even if pundits have every right to criticise the keeper, if done fairly (some of it has been, some of it hasn’t). Klopp also has a right to criticise the critics in reply – we can’t, as pundits and writers, get all uppity if we’re criticised in return.

To my mind it’s counterproductive to have no goalkeeping hierarchy; this realisation first occurred to me during Graeme Souness’ tenure, when David James, Bruce Grobbelaar and Mike Hooper were switched between every time one made a mistake. That just made for edgy goalkeepers – you can’t really iron out mistakes by heavily punishing them (dropping the miscreant), because mistakes can be a symptom of nervousness, and a heavy punishment can make people nervous. That will lead to passive, risk-free football.

On Achterberg, people are saying that he’s now worked with seven goalkeepers at Liverpool – Pepe Reina, Péter Gulácsi, Brad Jones, Simon Mignolet, Adam Bogdan, Danny Ward and now Loris Karius – and all have got worse under him. I’d disagree with this.

For starters, Pepe Reina had regressed under Mike Kelly, Roy Hodgson’s coach. There was a lot of hoofing involved and Reina developed some weight issues. Reina became increasingly disillusioned with life at Liverpool (after the massive Spanish influence was removed for the club to “go English” in 2010), and although he didn’t do too great after Achterberg was promoted to the first team position in 2011, he also struggled on loan at Napoli when reunited with Rafa Benítez, and bizarrely spent a year on the bench at Bayern. So he was in something of a funk for a good few years.

On Gulácsi, I had the pleasure of watching him train at Melwood in 2009, and he was clearly a talented young keeper, of whom Benítez told me he thought highly. But the young Hungarian was just 19 at the time. Over the next few years he was too inexperienced to be thrown in at Liverpool. Like many young players he needed experience, and time spent away saw him do pretty well on loan, but not remarkably so (loan after loan can be destabilising; different club, different tactics, different players, different living arrangements, and so on). Only now, aged 26, is he making waves, as part of RB Leipzig’s amazing start to the Bundesliga season, which saw them top until a few days ago.

Gulácsi probably came of age with two years spent at Red Bull Salzburg, as their no.1 – his first proper stint as regular senior keeper, coming once he had left the Reds. When Gulácsi left Liverpool in 2013, no one said it was a terrible move for the club, and at the time Mignolet seemed a better option. And even then, it took two years in Austrian football before Gulácsi was picked up by a newly-promoted Bundesliga club. It’s not like he was the most obviously great goalkeeper until that point, but he did have potential.

Brad Jones is having something of a career revival in Holland, but let’s not forget that even Middlesbrough fans thought he was a fairly terrible goalkeeper when the Reds signed him as a no.2; and Dutch football isn’t known for its quality these days. He’s mediocre, much like Bogdan.

The issue here is not Achterberg, but that a reserve goalkeeper is likely to be fairly limited to start with (the best ones don’t sit on the benches of clubs outside the Champions League). Then, when they occasionally play, they have no rhythm and they often start with a bad mistake, and see their confidence plummet. The biggest issue with any sport is confidence, and goalkeepers can lose theirs really easily; the best ones are mentally strong, but not necessarily so when they are young and starting out (David de Gea, as a recent example, had a torrid time initially).

I wouldn’t blame Achterberg for Bogdan dropping a cross against Watford, for example, but such elementary mistakes can cost keepers their reputation. Equally, Bogdan wasn’t great to start with; it’s as if not Achterberg is taking world-class keepers and routinely turning them into Pegguy Arphexad.

Then there’s Danny Ward, who from what I can tell was improving at Liverpool, went on loan at Aberdeen, and did extremely well in a weak league, for a club that doesn’t have massive pressure attached; came back as no.2 at Anfield; and is now no.1 at an unfashionable Championship club, on loan. I’m not quite sure how Achterberg can be blamed for him getting worse when it seems that the keeper is actually developing quite nicely. 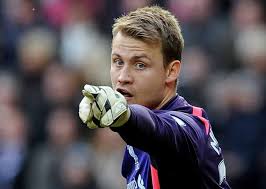 Simon Mignolet, in case you didn’t know what he looked like.

Which brings us onto Simon Mignolet and Loris Karius. I would argue that neither arrived as anything close to resembling a world-class goalkeeper. Mignolet was a decent Premier League keeper, and Karius is a young German who has been capped at every German youth level, but usually only once; and probably ranked as at no more than the 5th-best German keeper around (in terms of full international pecking order) at the time of his purchase this summer.

Karius had performed very well in Germany last season – he was ranked 2nd in a poll of Bundesliga players – but once any player transfers there can be a period of uncertainty to his play. Confidence usually comes after time, once fully established. Some keepers (and outfield players) start well, but at least half have iffy starts – some because they are not good enough and others because they are adjusting to an unimaginable amount of changes to their life and their job.

I would also argue that Mignolet has actually improved during his time at Liverpool. He has become more commanding with crosses, and an expert puncher. (In part due to the rugby-pads training Achterberg provides.) But the sense remains that Mignolet still isn’t quite good enough, and never has been.

The main problem he has under Klopp is that he can’t kick a ball very well, and you can’t quantify how many goals Liverpool don’t concede if they don’t gift possession as easily, nor how many they are unable to score when Mignolet kicks it into touch. Obviously when a keeper is making mistakes his ability to keep possession ticking over gets mocked, but it’s all part of trying to play fast, aggressive football. Mignolet seemed too slow in distributing the ball, and then not accurate enough; all of which allows the opposition to get back into shape.

Unlike many, I haven’t had too many criticisms of the transfer committee, but I would argue that Liverpool have spent too little on goalkeepers. Both Mignolet and Karius have been cheap buys, although so was Pepe Reina (although with inflation it’s now over £20m). 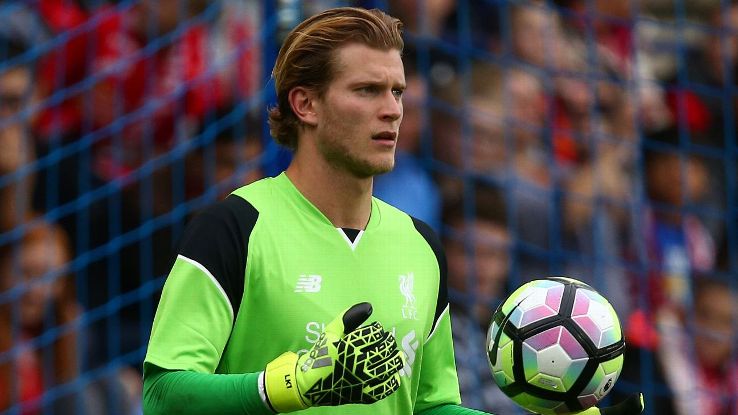 Loris Karius, in case you didn’t know what a handsome devil he is.

To me it seems a vital position in terms of the confidence of a whole side, but equally, I can’t say which better, more expensive keepers were out there and gettable, and most judges of the Bundesliga said Karius is a great young keeper who seemed a steal at £4.7m. And it’s almost always hard for a new keeper to adapt. It’s not like Henrikh Mkhitaryan, who struggled initially at United and had struggled initially at Dortmund, but an outfield player like him – arriving with a massive reputation – can be given minutes here and there to build up his confidence. It’s sink or swim, but even when they look like they’re drowning, you have to leave them in longer, to learn. It may initially seem to break them, but that can also make them.

None of this is to say that Achterberg is definitely free of all blame for the struggles of goalkeepers over the five years he’s spent in the role, but in that time the Reds have also not played a tight, cagey game which is heavily protective of its keepers. It’s mostly been a high-risk, high-reward style that almost won the league in 2014, and although it’s not been as chaotic this season (far fewer shots at goal are conceded than under Brendan Rodgers), we had just seen the Reds’ best start in 25 years. Liverpool give up few chances but they give up good chances.

I covered Karius in more detail yesterday, in the subscriber-only part of the article, including my thoughts on the goals he conceded. Please support this site by paying £5 a month to help us continue to bring you what we hope you feel is great content. And get involved in what we definitely feel is the best Liverpool comments section on the web.