Anchors and Wankers: the Psychology and Reality of Transfer Prices

Anchors and Wankers: the Psychology and Reality of Transfer Prices

While the price of a Premier League footballer does indeed get further and further away from the financial realities of the average fan, it’s not necessarily “insane”, as it still only rises at a fairly predictable rate of inflation. Based on our Transfer Price Index model, Graeme Riley and I could have told you at the start of the summer that the going rate (if there is such a thing) for an elite but not “top three in world” player – at a good age – was £90m.

So someone the Premier League could attract – i.e. excluding someone like Lionel Messi (although now he’s 29 his own value is diminishing) – could easily cost that amount, based on what other players have cost over the years, and based on the way transfer inflation rises and falls with television deals. When Steven Gerrard almost went to Chelsea for £30m in 2005, that would now equate to about £90-100m. So, a powerful, all-round central midfielder in his mid-20s who may already be one of the 10 best players in the world – but not an era-defining all-time-great like Messi – sounds a bit like the description of Paul Pogba too, whatever your allegiances. For the top 100 transfers when adjusted for inflation, see the interactive Tableau graphic.

If anything, inflation relating to the big prices has slowed slightly in the past three or fours years, given that FFP meant clubs could no longer spend what they didn’t turnover. The very biggest transfers in the past fours years have both been by Manchester United: Pogba and Angel di Maria. This pulled Chelsea and Manchester City back into the chasing back in terms of spending power, and in so doing pushed Manchester United out in front.

Before FFP, Chelsea had overtaken United on the cost of their squad by some considerable distance when adjusted for inflation, but United are back ahead (even after subsequently selling di Maria, who ranks 11th on the Premier League list once adjusted for inflation). With the enormous cost of United’s squad, once they had the right manager they were always likely to bounce upward. Below is a graph of the £XIs so far this season – the average cost of each club’s XI over the three games, once adjusted for inflation. (So all players are judged in “2016 money.) It shows how far United have pulled ahead, when ten years ago they were roughly the same distance behind Chelsea. 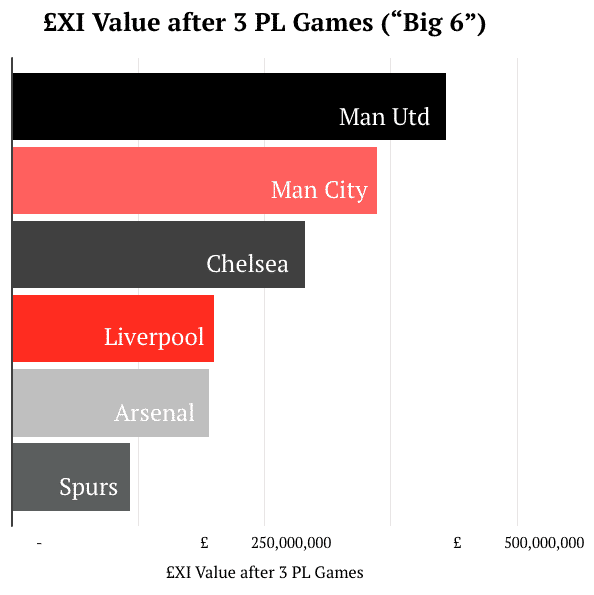 (But as I discussed on The Anfield Index podcast this week – a rare foray for me – Klopp seems unwilling to pay what he may see as crazy prices, and wants to build a squad in the same way he did at Dortmund. As Dan Kennett said on the podcast, his currency is time, not money. To overhaul the squad too heavily in his first season would lead to a team of strangers, so he appears to be trying to strike a balance. He also wants players who want to play for Liverpool, rather than almost ‘kidnapping’ a big name like Angel di Maria at United, who didn’t want to be there, and where it showed in his performances. Perhaps in a summer or two, if his methods aren’t working and if there’s a sense of time running out, Klopp will revert to bigger buys. But to me, the net spend issue this summer is because he prefers to do it his way, rather than FSG trying to save money.)

But it seems that people still can’t instinctively judge a realistic transfer price very well, and I suspect it’s because of the ‘anchoring effect’.

Research has shown that your judgement on monetary values are anchored by what’s gone before, and by previous perceptions that may or may not even be relevant.

So it seems to me that most of the time people are still thinking about transfer prices from a summer or two ago (which they’ve now come to accept as the norm), even though prices have risen in the meantime. Because let’s remember: two summer’s ago, everyone was saying the prices were mad, based on the prices of the summers before that.

Indeed, the only time that inflation has dropped regards to transfers – aside from the financial crash (and its coincidence with FFP) is when TV companies were struggling and ITV Digital went bust, based on their overspending on television rights. A big spike in the TV deals means a big spike in spending. (At present, just before the window closes and before the January additions, the average price of a Premier League player this season is up 60% on last season.)

So again, the average punter or pundit won’t be taking account of the anchoring effect.

Phil Thompson, when admitting his surprise at how well Sadio Mané has done for Liverpool, said that he thought that the player had been overpriced, and that “everybody” thought so. But did they?

To me, while not appearing cheap, he was still, compared with Christian Benteke, a better, younger and faster player who more suited Jürgen Klopp’s system.

He was a fraction more costly than Benteke had been; but this summer, based on inflation, Benteke (if a year younger and on the up) would have cost close to £50m if being bought from Aston Villa in the exact same circumstances as 12 months ago (i.e. they hadn’t just been relegated); £50m is the new going price for someone of his supposed calibre and age, based on his scoring record.

The reason he went to Crystal Palace for ‘just’ the (un-inflated) £32m the Reds had originally paid was because a) he was a year older, b) was surplus to requirements, and c) was coming off the back of an underwhelming season. Without inflation he appears to have held his value; with inflation he’s clearly, and logically, lost some value. (This loss of value is different from what appears on a club’s books, and the issue of amortisation, but is about the relative cost of a player within a market that changes every year.)

The fact that he didn’t cost Palace something as low as £20m – which is now easily paid for a player – was perhaps because he actually still posted pretty good numbers based on playing time, but didn’t offer enough in a hard-pressing system to post exceptional numbers, and he was never going to get the type of service the new manager wanted. He wasn’t a total flop, whose worth was shattered. (Liverpool could have played more to his strengths, to allow him to score 15-20 goals a season, but what never gets measured is how many goals the team as a whole missed out on due to switching focus. Liverpool certainly scored more freely without Benteke, and that’s the key.)

So if observers are used to lower prices, then they’ll be anchored to that perception, and struggle to comprehend the new reality.

In 1974 Daniel Kahneman, the creator of the concept, asked people to guess what percentage of African countries were in the United Nations, but they were only to make their estimate after spinning a wheel of fortune numbered 1-100. However, they didn’t know that it was rigged to stop at either 10 or 65. Those who had the wheel stop at 10 then guessed that 25% of African countries were in the UN; those who got 65 on the wheel guessed at 45%. Which, when you think about it, is utterly insane.

A couple of years ago, BBC’s Horizon, when looking at Kahneman’s work (which also included a great test on inattentional/situational blindness that could explain why referees miss things), created a version of this experiment when they asked passers by to name a fair price for a bottle of champagne, but only after they fished out a random number from a bag. Except, the random numbers were, like Kahneman’s wheel, fixed: they were either a high number (again in the 60s, if I recall correctly) or a low number (in the teens). Those who picked a low number then guessed that a fair price for the bottle of champagne should be far less than those who got a higher number, even though the number had nothing to do with the task in hand.

In these, and many other similar experiments, it shows that when we pluck a figure out of thin air we are actually basing it on something that’s gone before; but that what’s gone before doesn’t even need to be related to the subject. Just priming someone with a random number is enough to elevate or lower their guess. With transfers we often feel we have a handle on a fair price, but it’s often based on old data, and doesn’t account for inflation.

And of course, what any player is “worth” is a balance between what the owning-club value him at and what a buyer is prepared to pay. But the clubs should have some grasp of inflation (or just the ‘market’), and no one offers some utterly random figure of, say, £40,000,001 for a player, do they?

Finally, in reference to this article’s title, my apologies for not getting around to write about Neil Warnock.