Liverpool announced they will play FSV Mainz 05, one of Jürgen Klopp’s former clubs, on Sunday August 7 at the Opel Arena. (Liverpool Echo, and posted by Krishaldo on the site).

Klopp spent 18 consecutive years at the club, the first 11 as a player, turning out in 337 games, before coaching them in 270 matches for seven-and-a-half seasons.

Tickets will go on sale on June 23 via https:// http://www.eventimsports.de/ols/mainz05

The club has submitted a planning application providing further details on the proposed scheme, which would enable supporters to purchase a personalised granite stone in the Main Stand’s new public realm.

The granite walkway featuring fan messages would form part of the public realm, which has been designed to reconnect the stadium to nearby Stanley Park and the local community.

Another feature of the proposals would see the installation of granite benches outside the Main Stand, incorporating artwork celebrating key moments and players from the club’s history. 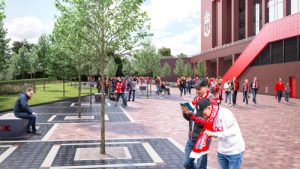