While Liverpool fans in the past few days have been subjected to rumourmongering links for Andros Townsend and Paul Pogba, who exist on opposite ends of the Dream Player Scale, it seems to have been forgotten by many that we’ve actually signed three players already. The Tomkins Times will be using professional scouting software and video analysis to compare their new centre-back, Joel Matip, who signed on a free transfer from Schalke with Dejan Lovren, who signed from Southampton for around £20m, under previous boss Brendan Rodgers.

Lovren has been one of many Marmite players to pull on the red shirt over recent seasons, but seemed more settled towards the end of last season, and many believe him to be the first choice centre-back at the club (pending the Sakho UEFA case). Lovren is more comfortable playing as the left-sided centre-back, but spent large sections of last season on the right side alongside Sakho. His performances were certainly an improvement on the terrible 2014-15 season, and he found more consistency within the improved defensive structure of new Reds manager Jurgen Klopp.

Matip is a versatile player who started his career as a defensive midfielder at Schalke, playing in front of current German international Benedikt Howedes, and making 20 appearances in his first season as an 18 year old academy graduate. He can also play on either side of a centre-back pairing, as he’s shown in recent seasons. At the age of 24, he’s already made 258 appearances for Schalke, which translates to 20,700 minutes in all competitions. Impressively, he’s also scored 23 goals and assisted 14 others for his team-mates. 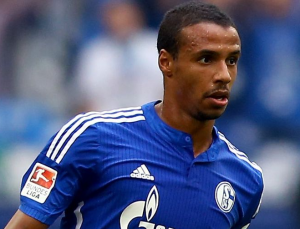 It is difficult to assess any individual defender using data, because most defensive actions are a consequence of the team’s structure and tactics. Nevertheless, with such big samples for these two individuals, there are some interesting findings and looking across seasons you can find out consistency, improvement or regression. Furthermore, basic stats such as aerial duels provide a clear strength or weakness.

According to Who Scored, Matip didn’t have any weaknesses last season, and excelled at tackling, interceptions and perhaps most importantly of all, concentration. As you will see later on in the videos, he also likes to dribble, which is a rare commodity (or flaw) depending on your perspective for what a centre-back should be doing. 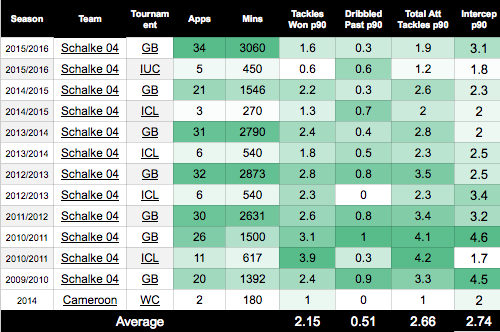 To get the actual definition of a tackle in a statistical sense, we need to defer to Opta, as they collate the information:

A tackle is defined as where a player connects with the ball in ground challenge where he successfully takes the ball away from the man in possession.

The above definition has immediately raised doubt in my mind. I suspect some people would view a tackle lost as missing the ball entirely, when in fact any tackle won or lost involves stopping your direct opponent having possession of the ball.

Therefore, isn’t any statistically registered tackle a good thing from a defensive point of view, as ‘won’ or ‘lost’ you’ve taken the ball from the opponent running towards your goal? To my mind, this is why the total number of tackles is far more relevant to any debate than how many are ‘won’ or ‘lost’. Opta continue:

A Tackle Won is deemed to be where the tackler or one of his team-mates regains possession as a result of the challenge, or that the ball goes out of play and is “safe”.

A Tackle Lost is where a tackle is made but the ball goes to an opposition player. 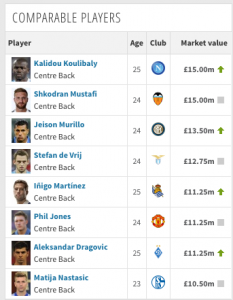 Finally, and unfortunately I had to use Squawka for this (many on this site have discovered that some of their data is often wrong, despite being a similar data feed to other sites like Who Scored and Fantasy Football Scout), he has a very good record when it comes to defensive errors. This makes sense alongside Who Scored’s strength rating for concentration. However, these are just on-the-ball defensive errors, and as you will see later, he has made a few, costly, mistakes. 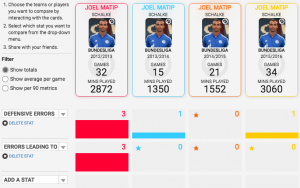 (Click to view detail; the green data bars represent the ‘best’ and ‘worst’ scale for all defenders in the Premier League)

Above is the full set of centre-backs (those who have played 500 minutes or more during an individual season) that have represented Liverpool over the last five season, ranked by the fewest goals conceded per 90.

The rest of this article is for subscribers only, and includes a full range of video clips – using professional scouting software used by numerous Premier League clubs – comparing both players, including: Defensive Positioning, Aerial Duels, Tackling, Fouls, Giving the Ball Away, and finally their Best Bits across the last two seasons.

Talking Tactics - The Book! The Podcast!